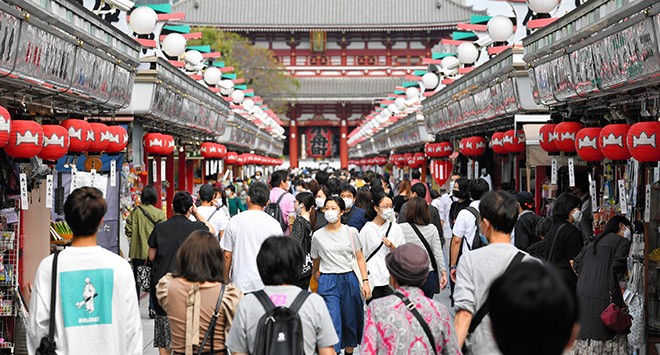 Pedestrians flood the Nakamise shopping street in Asakusa in Tokyo on Oct. 3, the first weekend since Tokyo was allowed to join the government’s "Go To Travel" subsidy program to promote tourism battered by the new coronavirus pandemic. (Takuya Isayama)

With foreign tourists shut out from Japan due to the coronavirus pandemic, about 15 percent of overall domestic travel revenue will be lost between February and December, according to a research institute estimate.

The forecast by Resona Research Institute also showed that Tokyo, Osaka and three other prefectures will be hardest hit among Japan’s 47 prefectures, representing 60 percent of the projected losses in consumption from the absence of inbound tourists.

The estimate, which was compiled by Hideyuki Araki, a senior researcher at the institute, is based on the assumption that spending among foreign travelers in 2020 remained at the same level as last year.

Araki made the projection based on trends in accommodations and spending, which is released by the government’s Japan Tourism Agency.

By breakdown, sale of goods was the largest of the lost revenues, at 1,442.3 billion yen, followed by accommodations, at 1,181.6 billion yen.

That suggests that department stores and drug stores have been battered more than developers of hotels by the halting of foreign arrivals due to the COVID-19 crisis.

By prefecture, the impact has been felt more strongly by urban centers. Tokyo, Osaka, Chiba, Kyoto and Hokkaido were the five hardest-hit prefectures, accounting for 60 percent of the country’s lost revenues.

When another five prefectures in descending order--Aichi, Nara, Kanagawa, Okinawa and Fukuoka --were added, the top 10 prefectures will represent nearly 80 percent of the total.

All these prefectures are home to international airports or host popular tourist destinations, such as World Heritage sites and amusement parks.

Araki’s research also found that the value of lost income is larger in the Kanto region, including Tokyo, at 1,506.4 billion yen, while the figure for the Kansai region, Osaka included, was estimated at 1,219 billion yen.

Given the size of the local economy of each, however, the Kansai region has been dealt a more serious blow than the Kanto region as the worth in the former accounts for 1.5 percent, compared with 0.7 percent in the latter.

One example highlighting the hit is a series of closures of drug stores that had opened catering to foreign visitors in Osaka’s Minami district.

“The Kansai region, which is closer to other Asian countries, has become more dependent on inbound tourists after budget carriers began providing service there,” Araki said. “As a result, their absence has been amplified in terms of the economic impact.”

The number of overseas tourists to Japan surged after visa requirements were eased and the yen was weakened under the Abe administration that was formed in late 2012.

A further surge in the number of inbound tourists was expected this year as Tokyo was scheduled to host the Summer Olympics, which were postponed to 2021.

But the year-on-year rate in the number of foreign travelers has dropped to more than 99 percent since April after Japan closed its borders due to the pandemic.

The government began accepting on Oct. 1 up to 1,000 foreign arrivals a day, primarily mid- and long-term visitors from around the world, for medical and other professional purposes.

But as tourists are not included in the easing of travel restrictions, it is difficult to forecast when consumption by inbound tourists will significantly rebound in Japan.