VOX POPULI: Will Trump’s sudden illness be the ‘October surprise’? 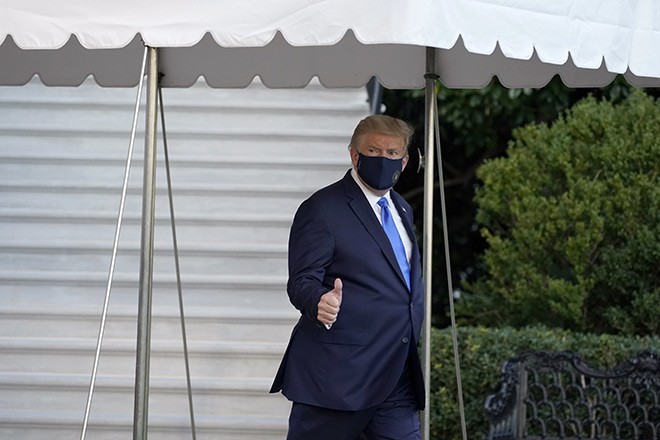 U.S. President Donald Trump gives a thumbs-up as he leaves the White House to go to Walter Reed National Military Medical Center after he tested positive for the novel coronavirus on Oct. 2. (AP file photo)

U.S. President Woodrow Wilson became infected with the Spanish flu during the 1919 Paris Peace Conference after World War I. His wife and aides were also affected by the infectious disease around the same time.

After his fever subsided, Wilson returned to the negotiating table, but he was a shell of himself, significantly weakened and with low energy.

Until he came down with the disease, Wilson argued for international reconciliation, pitting himself against the French prime minister, who advocated a reprisal against Germany.

But an exhausted Wilson readily conceded to the French stance, though it remains unclear to what extent the disease influenced his policy change.

The sudden illness of a political leader can change the course of history.

A century on, U.S. President Donald Trump has caught the novel coronavirus, and his wife and close aides have also become infected.

Trump has spent months downplaying the risk of the virus and voicing unwarranted optimism over its demise.

At one time, he suggested research on injecting disinfectant into the bodies of patients to fight the virus. At another, he said the virus would disappear “like a miracle” when the weather got warm.

Trump was flown by helicopter to hospital, though he reportedly showed only mild symptoms.

In the final stage of a U.S. presidential election, a game-changing event, known as an “October surprise,” often takes place, such as a natural disaster or a bombshell expose.

Trump’s infection with the coronavirus is bound to influence the Nov. 3 presidential election.

The Spanish flu of a century ago also struck Japan’s political community, and Prime Minister Takashi Hara took to his bed with a high fever.

“I contracted the influenza that has been recently transmitted in many places (which is commonly called ‘Spanish flu’),” he wrote in his diary.

Hara quickly went back to his duties, but he did not feel well.

He complained of poor health until spring the following year, leaving such entries as “I have yet to recover fully” and “I have not recovered at all” in his diary.

I wish Mr. Trump a speedy recovery. My hope is that he will refrain from tweeting controversial messages as much as possible while in the hospital.

May I ask, Mr. President, that you will focus on your treatment and take good care of yourself for once.