Mother of abductee Megumi says, ‘I will surely save you’ 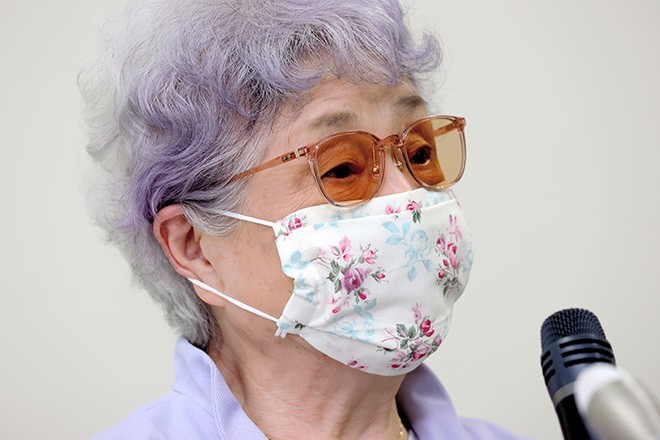 Sakie Yokota holds a news conference in Kawasaki on Oct. 1 ahead of her daughter Megumi’s 56th birthday. (Tatsuya Shimada)

Just as she does every Oct. 5, the mother of Japan's most famous abduction victim, Megumi Yokota, held a modest celebration at home to mark the birthday of the daughter she last saw as a 13-year-old in 1977 before she was spirited away to North Korea.

This year marked Megumi's 56th birthday, and the anguish of the past four decades inflects every mention Sakie Yokota, now 84, makes of her long-lost daughter.

“I feel like that I am groping blindly in the dark every day,” Sakie said. “I want her (Megumi) to embrace freedom in Japan.”

This year is more painful than others as Sakie's husband, Shigeru, died in June after waging a high-profile campaign for the return of the couple's daughter.

Sakie continues the campaign calling for the repatriation of all abductees in North Korea. Of as many as 17 Japanese nationals thought to have been seized in the 1970s and '80s, only five have been allowed to return to Japan. North Korea maintains the others are no longer alive or it has no record of them entering the reclusive country.

In past years, the husband and wife shared a small cake and coffee to mark their daughter's birthday,

But this year, Sakie Yokota had to do it alone.

“I have only their photos, so I feel very lonely,” she said at a news conference on Oct. 1.

Each time Oct. 5 rolls around, Sakie Yokota said she spends the day recalling when her daughter was born and reliving the all-too-short precious memories she was able to spend with her.

“Where and how has Megumi been marking her birthday in North Korea? Why can’t we save her?” she said. “I feel so full of pity for her.”

Resolving the abduction issue is ever more pressing for family members of the abductees as their numbers are dwindling.

Aside from Shigeru Yokota, Kayoko Arimoto, the mother of Keiko, and Tamotsu Chimura, the father of Yasushi, also died this year.

Sakie Yokota said her health condition is not good, adding that she has had little appetite since summer.

However, she tries to remain upbeat with the inauguration of the Suga administration in September after Prime Minister Shinzo Abe resigned for health reasons.

“He (Yoshihide Suga) may do things a little differently,” she said, referring to Abe's regrets at not being able to make much headway on the abduction issue during his nearly eight years in office. “I pray he (Suga) can move the issue forward.”

Shigeru’s photo is placed next to Megumi’s in the living room at home.

Sakie draws comfort in whispering words of encouragement to the teenager in the photo.

“I will surely save you,” she said. “Shigeru, please stay with me.”