Suga speeds up end of ‘hanko,’ but red tape may stick around 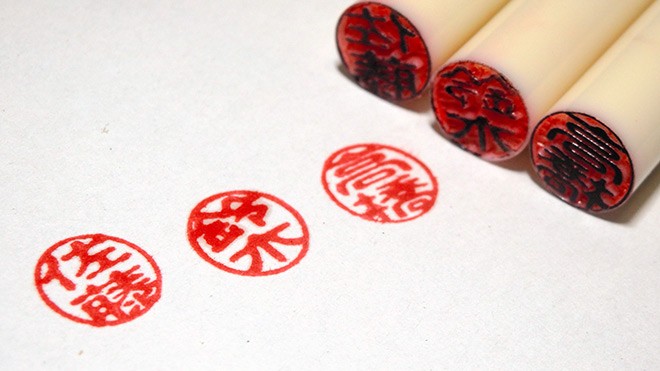 “Hanko” personal seals, a fixture in many Japanese documents, may be a thing of the past in a few years. (Toshiki Horigome)

With the government’s resolute push toward hanko-free official documents, personal seals may disappear from year-end tax adjustment and tax return papers starting as early as the next fiscal year.

Government ministries are considering ending hanko requirements for 785 types of administrative procedures involving the submission of documents to government. That figure makes up 96 percent of the total number of procedures studied for phase out, where individuals or business operators must certify their documents by stamping them with their hanko.

While the ministries insist hanko seals are necessary for the remaining 4 percent of the procedures, Taro Kono, the minister in charge of administrative reform, said his office will scrutinize whether that is the case.

Stamping documents as a means of authenticating them is a longstanding cultural fixture, entrenched in Japan for centuries. It is required for certifying contracts and official documents, showing approval on a given project or matter, and for confirming who saw memos circulated among businesses or government offices.

The sudden, hard push to break with the ingrained custom may seem to some observers like it was decided in haste under the new Cabinet, but it has actually been in the works for months.

The administration of former Prime Minister Shinzo Abe had been calling on government ministries and agencies to review hanko requirements on their procedures by the end of the year, under a plan to ease regulations that was approved in July.

That said, government bureaucrats are now scrambling to eliminate requirements for hanko seals on documents, following the formation of the Suga administration in September and after Kono was tapped to spearhead the reforms.

“I want to get rid of hanko personal seals immediately,” Kono said on Sept. 23, pressing government ministries to cooperate with the initiative.

Concurring with Kono, Environment Minister Shinjiro Koizumi wasted no time in having his ministry end the custom for employees to put their hanko on attendance records and application forms for child care leave.

“If there is word from the top, you feel obliged to toe the line,” a senior Environment Ministry official said.

Bureaucrats have long been reluctant to streamline administrative work, due in part to a conservative workplace culture of doing things the same way as their predecessors.

That may finally change. The bureaucrats suddenly find their futures are at the mercy of Suga, which is a powerful new incentive.

Before he ascended to the nation’s top political position, Suga earned a reputation for not tolerating bureaucrats who question the government’s policy measures. Suga was often behind transferring senior officials who voiced opposition to the government’s stance on a given matter, sources said.

Kono apparently takes a similar approach, according to one insider’s account. When he came to view an official at the Cultural Affairs Agency as not being keen to relax regulations on digital streaming, something he is pushing for, the minister suggested the official should be transferred to another job.

“Bureaucrats will follow what Cabinet members say if they think their positions will be put in jeopardy,” said a senior official at a government office. “Now, ‘the break with hanko’ has become the watchword buzzing among all government bureaucrats.”

Business circles are expected to benefit from the move away from hanko requirements, as it is expected to streamline procedures for submitting documents to authorities.

An online survey in May by the software company Adobe found that 74.7 percent of about 500 top executives at small and midsize companies are in favor of abolishing the hanko custom to enhance productivity.

But 50.1 percent also said they believe it will be difficult to end the custom. The most common reason for their skepticism is they must use the same contract formats their business partners employ.

While working from home is taking root amid the novel coronavirus pandemic in Japan, some workers still need to travel back to their offices just to stamp their hanko on documents.

But immediate efficiency gains from abolishing the hanko requirements might not be signed, sealed and delivered.

A study by the Japan Research Institute showed only 8 percent out of 56,000 kinds of administrative procedures can be completed online, as of the end of March 2019.

In addition, some segments of the Japanese population are not familiar with digital culture. Municipalities are expected to provide services to those people by seeing them face to face.

In the face of a swift shift away from hanko culture, seal manufacturers, most of them small in size, are resigning themselves to the notion that they may be on course to eventually being phased out.

The number of seal manufacturers has declined over the past few years because of a societal trend toward going paperless, and due to a lack of successors to keep their businesses alive.

According to data from the industry group Zen-Nihon Inshogyo Kyokai, it had 941 member companies in 2019--just less than one-fifth its total membership from about 40 years ago.

This latest move to do away with the hanko in official circumstances puts their survival prospects further at risk.

But a senior official at the industry group said the hanko will not die out completely.

“We’ll have to wait and see,” the official said. “But I believe that a certain number of procedures will still require hanko.”