Abe’s office given preliminary roster for Science Council in 2017 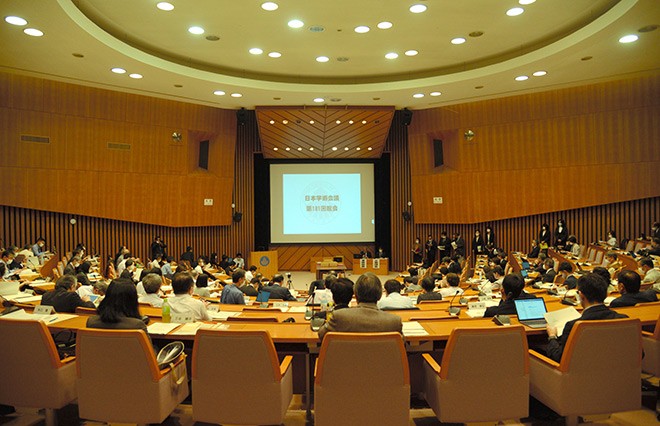 The Science Council of Japan holds a meeting in Tokyo on Oct. 1. (Yu Kamata)

The Abe administration in 2017 may have set up the first obstacles in the process of automatically appointing recommended candidates to the Science Council of Japan.

Several former council executives explained that three years ago, officials under then Prime Minister Shinzo Abe asked the council to submit beforehand the names of possible candidates for the recommendation list. It was the first such request from the prime minister’s office.

In the summer of the previous year, the prime minister’s office expressed some dissatisfaction over the individuals recommended to fill three vacancies on the council. Those vacancies ended up not being filled.

In December 2016, Takashi Onishi, a professor emeritus of urban engineering at the University of Tokyo who was then president of the Science Council, met with Kazuhiro Sugita, a deputy chief Cabinet secretary, at the prime minister’s office, several former council executives said.

Sugita asked Onishi to explain how the selection process for 2017 was moving along before the list of recommendations was submitted.

Onishi and Sugita agreed that in the final stages of hammering out the list, a roster of about 110 possible candidates would be submitted to the prime minister’s office.

Half of the council’s 210 members are appointed by the prime minister every three years based on recommendations submitted by the Science Council.

All recommendations had been approved until Prime Minister Yoshihide Suga recently rejected six scholars on the list without explaining why.

In late June 2017, Onishi and officials with the council secretariat gave Sugita a roster of about 110 names and explained how the selection process was proceeding.

While officials with the prime minister’s office did state their views, all 105 scholars who ended up on the recommendation list were approved at a special council meeting in late July. Abe appointed all of the academics on the list to the council in October.

A source in the prime minister’s office explained why the roster was requested beforehand.

“We thought it was not right that we had no leeway in the decision and thought it was only natural to have a preliminary coordination involving those connected to the individual with the authority to make the appointments,” the source said.

A former council executive said, “They likely wanted a process in which they would be convinced that they had input before the 105 candidates were agreed upon to avoid having the prime minister’s authority to appoint be in name only.”

However, another former council executive said: “I thought it was wrong to even have such preliminary discussions. The prime minister’s office became more heavy-handed since the attempt to fill vacancies in 2016. We should have revealed what had happened at that time.”

Onishi said that while some may feel it was inappropriate to explain the selection process to the prime minister’s office, he noted that the Science Council is a government organ, and that the person appointing members should be given an explanation.

But Onishi said it was regrettable that Suga rejected six scholars recommended by the council. The six had criticized Abe policies in the past.

“Science Council members are selected based on their outstanding research achievements, so we never take into consideration their ideological beliefs or political views,” Onishi said. “The government should acknowledge diversity in ideological beliefs, so I do not think there is a good reason for not appointing those six.”