Handwritten ‘waka’ poems by Hirohito to be shown for 1st time 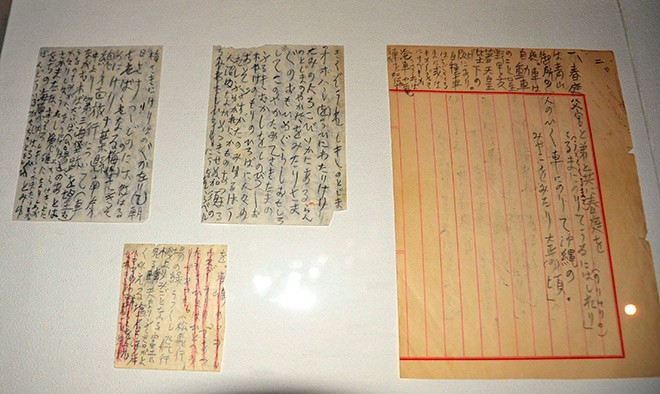 Emperor Hirohito's scratchy penmanship will be on show for the first time with a collection of rare handwritten “waka” poems he composed in his waning years.

The special exhibition at the Gakushuin University Museum of History in Tokyo’s Toshima Ward will run from Oct. 15 through Dec. 5.

The museum will stream a video of the manuscripts by Hirohito (1901-1989), posthumously known as Emperor Showa, and handwritten items by imperial family members on its website. The video will be shown for free.

The manuscripts were donated in September 2019 by Morisuke Makino, 94, who served as “udoneri,” the traditional term for Imperial Household Agency employees whose primary task was to attend to the emperor's personal needs each day.

The jottings are on 29 sheets of paper with the characters for “Kunaicho” (Imperial Household Agency) printed on them, as well as about 10 slips of paper. They contain at least 252 poems as well as notes and comments written in pencil, most of which have never been seen before.

The Asahi Shimbun reported the discovery in its Jan. 1, 2019, morning edition and follow-up articles.

The manuscripts were written from around 1982 through 1987, according to the museum. In the poems, Hirohito wrote about peace, family and daily life, such as his visit to Okinawa Prefecture when he was crown prince, and his wife Nagako, the future Empress Kojun.

“They are valuable materials showing how Emperor Hirohito wrote down whatever thoughts came to mind in his daily life and revised the expressions,” said Jun Tanaka, a researcher at the museum. “I think waka was something he felt familiar with.”

Makino found the manuscripts in the Fukiage section of the Imperial Palace, where Hirohito spent his later years. They were among a stack of papers Makino collected for disposal. He thought the manuscripts might be significant and kept them in his possession. He later disclosed them to The Asahi Shimbun and searched for where he could donate them.

The museum’s special exhibition will also showcase other “shinkan” and “shinpitsu” handwritten jottings by former emperors. A lecture by Hiroyuki Shimatani, director of the Kyushu National Museum, will also be streamed from Nov. 21.