Cabinet paper in 2018 broke from tradition on Science Council 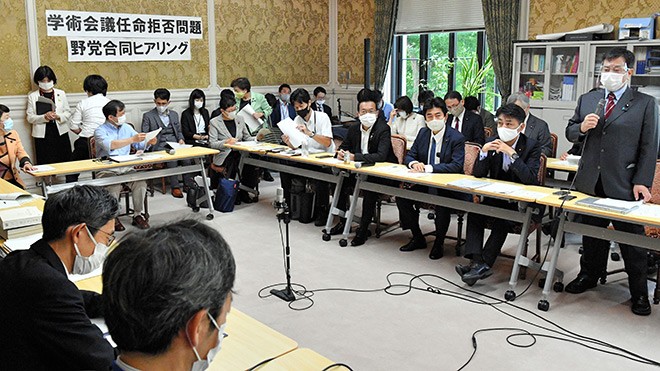 A hearing between opposition lawmakers, background, and officials of the Cabinet Office, foreground, is held Oct. 6 over Prime Minister Yoshihide Suga’s refusal to appoint six scholars to the Science Council of Japan. (Kotaro Ebara)

A government document produced in 2018 and disclosed on Oct. 6 broke with tradition and said the prime minister is not obliged to appoint all recommended members to the Science Council of Japan.

Details of the document came at a hearing of the Cabinet Office, which oversees the council, and opposition lawmakers, who had demanded its disclosure. The hearing was held five days after Prime Minister Yoshihide Suga rejected six of 105 recommended members to the Science Council.

Suga is the first prime minister to deny membership to those recommended by the council.

The document concluded that since council members are specially appointed national civil servants, “the prime minister would not have the obligation to appoint them as recommended” by the Science Council.

The conclusion was reached after officials at the Cabinet Office and Cabinet Legislation Bureau met in 2018 to review the interpretation of the Science Council Law.

In 1983, the system was changed so that prime ministers would appoint members of the council.

At a Diet session that year, Prime Minister Yasuhiro Nakasone said such appointments by the prime minister would be in name only, and he indicated that the government would respect the Science Council’s choice of new members.

“The government’s appointment is merely a formality,” Nakasone said. “Academic freedom and independence will be guaranteed.”

Suga’s rejection of the six scholars has raised concerns that his government is suppressing academic freedom.

The six rejected scholars, all accomplished academics in humanities and social sciences, had criticized the national security and related legislation pushed by Shinzo Abe when he was prime minister.

Suga played a key role in the Abe administration as chief Cabinet secretary.

The document is dated Nov. 13, 2018, and titled, “Regarding the relation between (the Science Council’s) recommendation under Article 17 of the Science Council Law and appointment of members by the prime minister.”

Opposition lawmakers had demanded disclosure of the document.

The document refers to Article 15 of the Constitution, which states, “The people have the inalienable right to choose their public officials and dismiss them.”

The document stated the interpretation of the article and other legislation do not prohibit the prime minister from “calling for the recommendation of more candidates than the number set for new members and choose from them to appropriately carry out the authority of appointment.”

But the document does not touch on whether that interpretation is consistent with the government’s traditional stance on appointing council members.

The Science Council, established in 1949, is a representative organization of researchers in all fields. Although it is funded by the government, it has been considered an entity independent from the government.