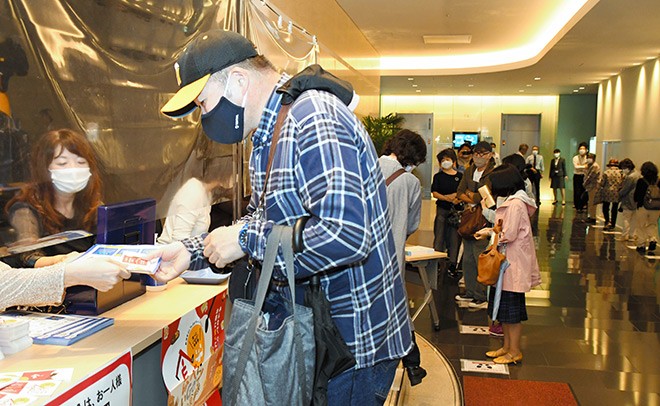 About 30 people line up to purchase meal coupons at a sales venue set up in Niigata on Oct. 5. (Toshinari Takahashi)

Sales of premium “Go To Eat” restaurant coupons, which offer discounts of 25 percent off meals, started early in Niigata on Oct. 5, ahead of other prefectures in Japan.

The coupons are issued by each prefecture as part of Japan’s “Go To Eat” government-subsidy campaign, which aims to provide a boost to restaurants left roiling after the coronavirus pandemic took major bites out of their revenue.

The central government has set aside 180 billion yen ($1.7 billion) for the campaign designed to revitalize the nation’s restaurant industry.

People lined for the premium coupons on sale in Niigata Prefecture across some 150 service counters, which became available at 10 a.m.

A coupon book costs 10,000 yen, but is valued at 12,500 yen worth of food. In some areas, dozens of people waited in line to purchase their books.

Maki Ogawa, 82, used one of her coupons for lunch immediately after purchasing it. She ate a daily lunch special, priced at 900 yen before tax, at the sushi restaurant Takizushi, a local fixture established 49 years ago in Niigata's Nishi Ward.

The “Go To Eat” campaign also offers another program that allows customers to receive rewards points that they can later spend like cash at registered restaurants when they use certain reservation websites. Although it started on Oct. 1, Ogawa said that it was difficult to use the program.

“Meal coupons are much easier to understand, and this is win-win relationship between restaurants and customers,” she said. “I hope that more customers will return to local establishments.”

Sales at the sushi restaurant during September dropped by half compared to its September sales from last year.

The restaurant’s proprietor, Mitsuhiro Takizawa, 47, thought the coupon program was a great opportunity to generate business, and decided to apply to register his establishment under the program.

He reduced the number of customers’ seats at the restaurant from more than 100 to about 45 as a preventive measure against the coronavirus. Only two customers used their meal coupons during lunchtime that day, but he is optimistic it will catch on.

“It might not increase the sales right away, but more new customers could choose to dine out in the future,” Takizawa said.

The Ministry of Agriculture, Forestry and Fisheries chooses the prefectures’ coupon program administrators through a public invitation process.

But program officials are advising some caution because the ways customers can purchase the coupons, and their starting periods, differ between areas.

But an operator in Ehime decided to offer 4,000-yen books.

“We would like high school and university students to use them, so we lowered the unit price,” an official said.

Participating administrators in Niigata and Hyogo prefectures offer coupon books only comprised of 500-yen tickets because they are expected to be used for low-priced lunches where customers do not get change back.

Digital coupons are being issued through the popular Line social media app in some prefectures to reduce human contact when coupons are purchased or used.

The coupons are also being sold differently from area to area.

Tickets that can be exchanged to purchase coupons are being distributed to all households in Ishikawa Prefecture, to make it fair. A coupon lottery system was set up in Kagawa Prefecture, which works through sending residents double postcards.

But in most cases, sales are on a first-come, first-served basis, and will end once all the coupons sell out.

In many areas such as Akita, Tochigi, Yamanashi and Toyama prefectures, people can purchase coupons at local commercial facilities and banks without first making reservations.

In more than 10 prefectures--mainly metropolitan areas--people can apply online for the coupons in advance to avoid crowds at service counters. Customers receive the coupons after they pay for them at convenience stores.

But it is harder for elderly people and others who have difficulties accessing the internet. Therefore, in Gifu and Aichi prefectures, those people are encouraged to apply by phone.

Even in some other prefectures, program administrators are considering a way to let people phone into call centers to apply for the coupons.

The callers would provide their personal information over the phone, which the operators would input into the online ticket system and then tell the callers their reservation numbers.

But an official is concerned that system could lead to problems.

“If we are flooded with calls, we might make people wait for a quite long time,” the official said.

Some franchises, like fast food restaurants, leave it up to their member shops to decide on their own whether to join the program.

The rosters of participating restaurants can vary greatly across areas.

The maximum purchase amount is 20,000 yen per person at a time, but a given customer can purchase more later.

Those coupons can be used through to the end of March 2021, although for some areas it only runs until the end of February. The coupons are non-refundable.

“Their utility depends on how many restaurants that people wish to dine at are available in their areas,” consumer affairs expert Tatsuya Kakita said. “Please purchase an amount that you can finish, after checking how to purchase coupons and what the registered restaurants are in each area.”

(This article was written by Akihito Ogawa, Toshinari Takahashi and Noriyuki Kaneta.)