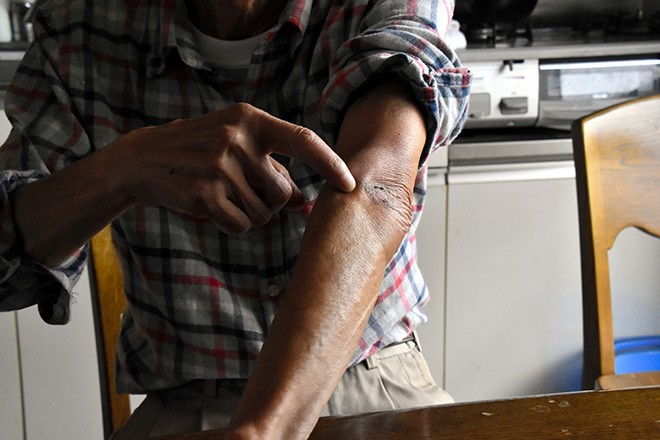 A man in Tokyo’s Adachi Ward in September says he was attacked by men who identified themselves as gas equipment inspectors. (Emi Iwata)

Crooks posing as gas equipment inspectors have carried out a string of violent robberies in Tokyo and surrounding areas, resulting in one death, that have shaken residents.

Police have issued an alert to residents, particularly seniors, to be cautious over anyone asking to enter their homes to conduct a utility inspection.

At least 12 robberies involving fake inspections have occurred in Tokyo and Kanagawa and Chiba prefectures since August.

Most victims were elderly people. In many cases, the perpetrators bound the victim’s hands and legs with duct tape.

Some victims were assaulted and suffered broken bones.

In many of the incidents, the perpetrators used the same trick to gain entry to the victim's home, police said.

A group of men showed up at a home introducing themselves as employees with a gas company, an electricity company or a fire department, saying, “we're here to inspect your equipment.”

They entered the home, bound the victims’ hands and duct-taped their mouths. Then they stole cash and bank cards.

Some victims told police that they had received a suspicious call before the incident that asked them details about their family and asset management situation.

In mid-September, two men showed up at the home of an 81-year-old woman in western Tokyo's Machida, identifying themselves as local government staff.

Through the intercom, one of the men told her, “We'd like you to cooperate for a survey on the novel coronavirus.”

When she declined, the men entered her home through an unlocked window. They tied her up and assaulted her before stealing money and items.

Multiple victims suffered minor and severe injuries. One victim remained tied up for more than eight hours before help came.

“The worst can happen when a victim is elderly,” a police official said.

An 80-year-old woman choked to death in Tokyo's Koto Ward in February 2019 after the perpetrators bound her hands and legs and sealed her mouth with duct tape.

The Metropolitan Police Department, together with prefectural police in Kanagawa and Chiba, have arrested multiple men for executing the slew of crimes.

Some of the men were hired through social networking sites such as Twitter, an indication that the series of robberies were organized, police said.

Police have urged residents not to open their doors to unscheduled or unexpected visitors and only to speak to them through an intercom.

Residents are also encouraged to ask visitors to give their names and the name of their employer and to then call the company to confirm if they actually work there.

(This article was written by Yuta Ogi, Kanoko Tsuchiya and Yosuke Takashima.)