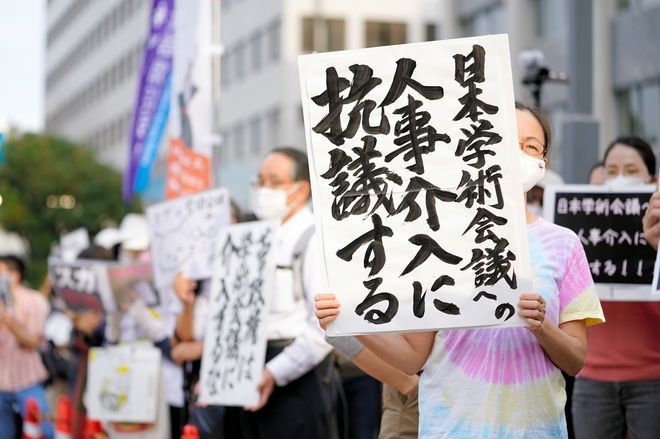 Protesters denounce the government’s refusal to appoint six scholars to the Science Council of Japan near the prime minister’s office building on Oct. 3. (The Asahi Shimbun)

Nagamasa Kuroda (1568-1623), the first daimyo (feudal lord) of Fukuoka, held a meeting known as “Iken-kai” (literally, “objection meeting”) in his castle almost every month. His purpose was to get his senior retainers and others to speak to him with total candor.

Giving his word that he would never be angry, no matter how much someone’s remarks may upset him, Nagamasa dubbed the meeting “Haratatazu no Kai” (Anger-free meeting).

When Nagamasa began learning “utai” (vocal section of the music associated with classical Noh drama) and performed a number at a meeting to show off his mastery of the art, everyone praised him, except one retainer who said to his face, “If your lordship is unable to see through the flattery of sycophants, you should not expect your clan to thrive in perpetuity.”

Weeping tears of gratitude, Nagamasa told the man: “You pointed out my mistake. From now on, my administration will commit few errors, and the nation will remain well and secure,” according to “Meisho Genkoroku” (Collection of words and deeds of great commanders in Japanese history).

In what may be a declaration of refusal to hear anything he does not want to hear, Prime Minister Yoshihide Suga rejected the appointment of six candidates to the Science Council of Japan, even though they were recommended by the council itself.

The six scholars were vocally critical of some of the key policies of the preceding Abe administration, such as issues related to the national security legislation. All I can conclude is that Suga decided to keep these scholars out of the council.

The government on Oct. 6 released a document listing the names of 99 new council members with their achievements in disciplines spanning from history to philosophy, chemistry, agriculture, and so on.

I looked for the names of the six rejected candidates on the document, only to find them blacked out and illegible. This left me feeling bleak, as if each person’s achievements have been negated.

“The Science Council of Japan is a national institution, of course, but it is vested with a high degree of autonomy so that it will not be subjected to restraints for political convenience,” Prime Minister Shigeru Yoshida (1878-1967) said in his congratulatory address at a ceremony marking the council’s birth in 1949.

The words do not sound dated at all today.

Any administrator worth their salt would open their mind to any sound opinion and hear the speaker out without resentment.

But the Suga administration is quite eager to eliminate opposing opinions, no matter how legitimate.