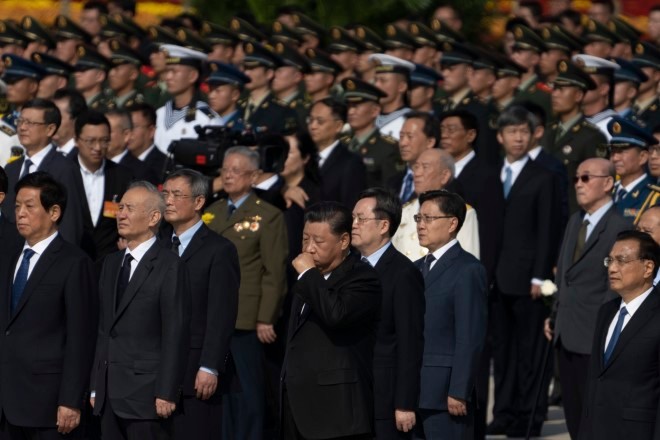 Chinese President Xi Jinping coughs during a ceremony held at the Monument to the People’s Heroes on Tiananmen Square in Beijing on Wednesday, Sept. 30, 2020. (AP Photo)

TAIPEI--Negative perceptions of China have increased sharply among people in several advanced democracies, especially in Australia and Britain, according to a survey from the Pew Research Center released Tuesday.

The survey comes as China is engaged in multiple trade and diplomatic disputes with its neighbors and other countries, driven in part by a more aggressive diplomatic approach.

The survey conducted in 14 democratic countries with advanced economies showed a majority of people had an unfavorable view of China. It was conducted from June 10 to Aug. 3 among 14,276 adults across the 14 countries via telephone.

In Australia, 81 percent said they have an unfavorable view of China, according to the survey, a rise of 24 percentage points from last year.

The rise corresponds with higher tensions in the bilateral relationship after Australia led the call for an international investigation into the origins of the coronavirus. China responded on the trade front, suspending imports of Australian beef, putting high tariffs on barley from the country and starting an anti-dumping probe into imports of Australian wine.

While the survey showed Australia had the sharpest increase in negative attitudes toward China, other countries also showed an upward trend: Those with an unfavorable view toward China hit 74 percent in Britain, a rise of 19 percentage points compared to last year; 71 percent in Germany, a rise of 15 points; and 73 percent in the U.S., a rise of 13 points.

Further, in nine of the surveyed countries--Spain, Germany, Canada, the Netherlands, the U.S., the U.K., South Korea, Sweden and Australia--negative views have reached their highest level in the 12 or more years that the center has been conducting the survey in those countries, according to Pew Research Center.

Many democratic countries, including those surveyed, condemned China earlier this year when it pushed through a new national security law in Hong Kong that critics say infringe on rights promised to the former British colony when it was handed to Chinese rule.

One of the most important factors with regard to China’s reputation abroad has been the coronavirus. The virus emerged late last year in the central Chinese city of Wuhan and has since spread around the world. China has been criticized for not being fast enough in its initial response and for attempting to cover up early reports of the virus.

Those who believed China did poorly in dealing with the pandemic were much more likely to view the country in a negative light.

Citizens in the surveyed countries also do not trust China’s leader Xi Jinping, with a median of 78 percent saying they do not have confidence in him to do the right thing in world affairs.

Only U.S. President Donald Trump had a worse reputation among those surveyed, with a median of 83 percent saying they do not trust him.

Trump has been one of the most vocal critics of China, continuing to blame Beijing for the coronavirus while trying to play down the impact the virus has had in the U.S., which has reported the world’s highest death toll from COVID-19.