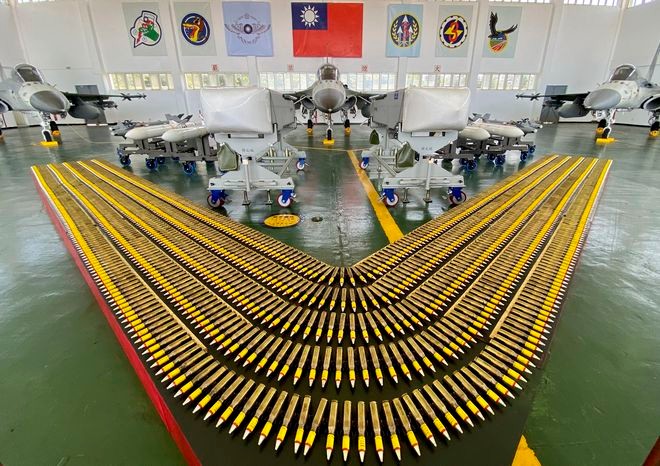 Taiwan's Indigenous Defense Fighter (IDF) jets are displayed with their weapons payload during a visit by Taiwan President Tsai Ing-wen at the Penghu Magong military air base in outlying Penghu Island, Taiwan on Sept. 22. (AP Photo)

WASHINGTON--A senior U.S. defense official said on Tuesday Taiwan’s plan to boost defense spending by $1.4 billion was a step in the right direction, but insufficient to ensure resilient defense in the face of an increasing Chinese threat.

In August, the Taiwanese cabinet proposed T$453.4 billion ($15.24 billion) in military spending for coming year, versus T$411.3 billion  budgeted for this year, a rise of more than 10 percent.

The move comes as China has significantly stepped up military activity near Taiwan, which it regards as a breakaway province, raising fears it might one day attempt to retake the island by force.

David Helvey, the acting U.S. assistant secretary of defense for East Asia, told an online defense industry conference hosted by the U.S.-Taiwan Business Council that actions of China’s People’s Liberation Army were a test for Taiwan’s “ability and preparedness to respond to coercion.”

“While the PLA’s actions are real and dangerous, the PLA is not unbeatable,” he said. “Taiwan can, through smart investments, send a clear signal to Beijing that Taiwan’s society and its armed forces are absolutely committed to the defense of Taiwan.”

Referring to the proposed defense budget, he added:

“These increases, while a step in the right direction, however, are insufficient to ensure that Taiwan can leverage its geography, advanced technology, workforce and patriotic population to channel Taiwan’s inherent advantages necessary for a resilient defense.”

Helvey said Taiwan must continue to seek a balance in defense investment between indigenous development and foreign purchases, while avoiding over-investment in areas that did not provide a good return for limited resources.

He said United States encouraged Taiwan to invest in “large numbers of small capabilities” that would signal that “an invasion or attack would not come without significant cost.”

These include acquiring as many coastal defense cruise missiles as possible and other capabilities to help defend coastal areas and beaches, including short-range air defense, naval mines, fast-attack craft, mobile artillery and advanced surveillance assets.

Helvey also said Taiwan needed to strengthen its reserve forces, and their training “should demonstrate to the people ... how small, but manageable actions can support Taiwan’s defense.”

As fears have grown about China’s intentions, so have concerns in military circles in the United States and elsewhere about Taiwan’s military preparedness, as well as the willingness of its people to stand up to any Chinese attack.

The United States is required by law to provide Taiwan with the means to defend itself but has maintained a policy of “strategic ambiguity” when it comes to the question of whether it would intervene militarily in the event of a Chinese attack.

Last month, sources told Reuters the United States plans to sell as many as seven major weapons systems, including mines, cruise missiles and drones to Taiwan.