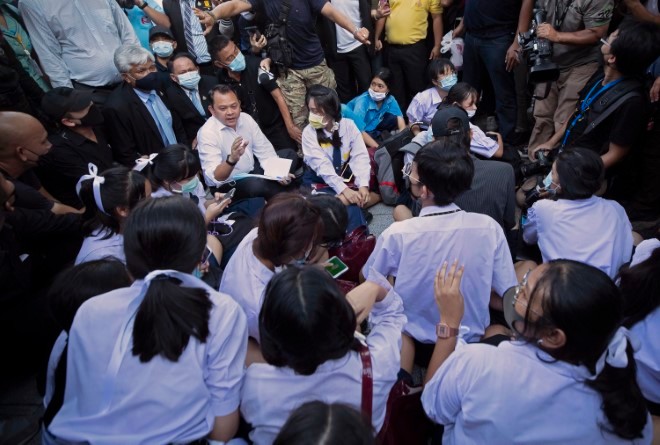 BANGKOK--A scandal over corporal punishment of schoolchildren in Thailand expanded Tuesday as six teachers and caregivers at a school accused of such abuse turned themselves in to face criminal charges.

There are now 13 employees of the Sarasas Witaed Ratchaphruek School who are facing charges after the parents of 30 students complained that their children, mostly around kindergarten age, had been physically abused, said police Lt. Gen. Ampol Buarubporn, the regional police commissioner overseeing the case.

Ronnarong Kawpech, a lawyer representing 30 families, said his clients filed charges of physical abuse, illegal detention and child abuse against the staff members of the school in Nonthaburi province, just outside Bangkok. They also filed separate complaints against both the school and the involved staff members seeking 5 million baht ($160,200) in compensation for each abused child.

Corporal punishment is not unusual in Thai schools. The Education Ministry recently issued orders barring teachers from using physical punishment against their students, but many reports, often including videos posted on social media, suggest the practice is still widespread.

The issue has been highlighted during a wave of political and social protests in Thailand. Secondary school students demanding educational reforms, who have organized themselves under the tongue-in-cheek name of “Bad Students,” have staged several protests against schools and the Education Ministry. One of their demands is for the ministry to punish schools and teachers for using physical punishment of students.

The scandal over the Sarasas Witaed Ratchaphruek School broke out when a parent went to consult with a school staff member about a son who had developed some strange behavior and refused to go to school. The staff member displayed video from a closed-circuit TV camera installed in the classroom that showed a female caregiver physically abusing the child while other staff turned a blind eye.

According to lawyer Ronnarong, one caregiver was seen employing physical violence more than 20 times in videos covering just eight days.

Many of the video clips have been posted on social media, drawing attention from mainstream media. One of the most shocking ones shows a student being thrown to the floor and then having a female caregiver cover his head with a black garbage bag as he tries to run away.

Another clip shows a caregiver repeatedly push a pupil against a wall while he is trying to leave the classroom.

Piboon Yongkamol, the founder and president of the privately run chain of 49 Sarasas schools, told Thai media he had apologized to the parents, but showed little remorse for the situation. He charged that parents were making a fuss just to get money out of him, and if he were forced to close his schools, he would lose nothing financially because of the profit he could make by selling the land they are on.