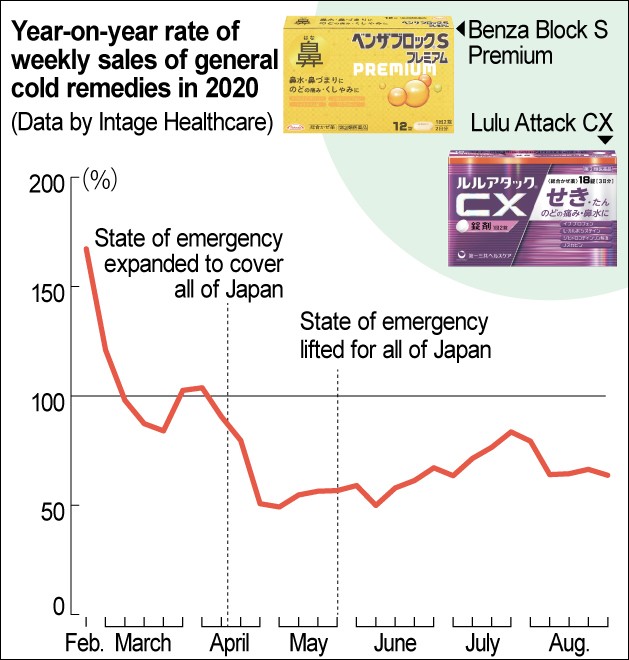 The new norm of wearing masks, washing hands and gargling regularly as a precaution against the new coronavirus means fewer people are catching colds with the result that sales of cold medicine have dropped significantly from last year’s levels.

The market for cold remedies had already been shrinking due to Japan’s declining population. The health scare dealt another blow, so now pharmaceutical companies are accelerating efforts to make medications fine-tuned to particular symptoms.

At that time, the outbreak of the coronavirus in China was drawing heighted attention in Japan. Families apparently scrambled to stock up on cold medicines so as to be prepared for any signs of illness.

But sales of cold medication have declined sharply since April, when the government issued a nationwide state of emergency over the pandemic.

In April, sales dropped to half of the level in the same month last year.

Although they rebounded slightly since late May, when the state of emergency was lifted, sales in August moved at levels between 60 percent and 70 percent, compared with the same month in 2019.

Behind the lackluster sales of cold medicine is a shift in hygiene habits as people now are more diligent about washing their hands and gargling, as well as donning a mask when they go out, as they try to protect themselves against becoming infected.

Another factor concerns requests under the state of emergency for people to stay home as much as possible and refrain from going out unless absolutely necessary. This also worked to bring down cases of the common cold.

“A fall in sales of cold medication has something to do with the restriction of people’s movements” in spring and onward, said an official with drug manufacturer Takeda Consumer Healthcare Co.

Takuya Ishida, who tracks the sales trend of over-the-counter drugs at Intage Healthcare, noted that sales of cold medicine also were affected while those of masks soared in 2009, when a similar influenza epidemic was raging.

An estimate by Intage Healthcare showed that the overall sales of cold remedies stood at around 100 billion yen ($952 million) in fiscal 2019, down by 20 percent from 20 years ago.

In a change of tactics, pharmaceutical companies are now trying to woo customers by rolling out cold medications manufactured to respond to specific symptoms, such as fever, or runny nose, or that prove most effective when taken according to specific instructions.

The company said the drugs in the latest series contain differing volumes and kinds of active ingredients from each other to address the cold by symptom.

It began selling Lulu Attack CX, a drug that the company says has efficacy in the treatment of coughing for people unable to sleep at night because of the condition.

(This article was written by Eisuke Eguchi and Takao Shinkai.)