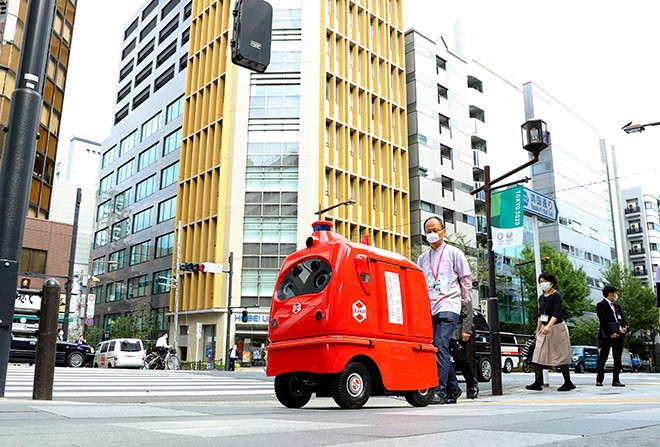 A self-driving delivery robot put its rubber to the road on Oct. 7, safely crossing a street in central Tokyo as it made its way to deliver packages during its first public test drive.

It marks the first time an autonomous delivery robot has driven on a public road in Japan.

The DeliRo autonomous delivery robot, developed by Tokyo-based driving technology startup ZMP Inc., received parcels at the Tokyo Teishin Hospital in the capital’s Chiyoda Ward and departed in the morning.

The fire-engine red robot hit the road, avoiding humans and obstacles by using its sensors and cameras. It safely traversed a crossing by detecting the colors of traffic signals.

The robot then traveled roughly 700 meters along a sidewalk to deliver the parcels at a Kojimachi post office parking lot.

Users can unlock the doors to four compartments installed on the robot by using a QR code to obtain their packages.

Japan Post Co., which showed off the robot’s performance during the test run to the media, obtained a motorcycle license number for the robot, as well as approval from police and other related authorities beforehand.

Japan Post started to experiment with robots about three years ago. The company aims to use robots in its delivery services for homes and offices in the future.