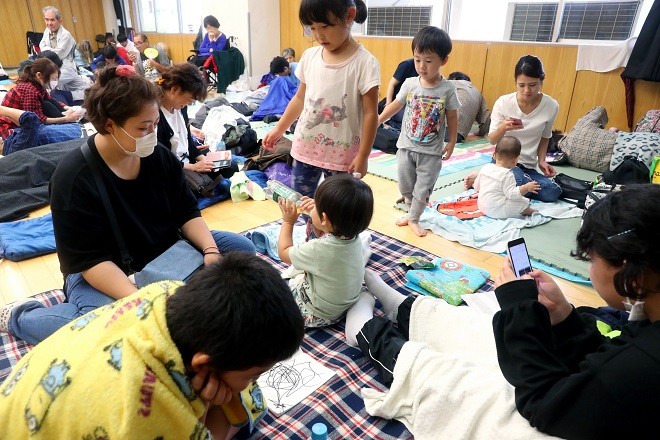 A hazard map, created last year by Tokyo's Edogawa Ward government to show the community's risk of flooding, is imprinted with warnings such as "total submersion of most of this neighborhood" and "you must not remain here."

Because this predominantly low-lying ward could remain inundated for two weeks if the Arakawa river floods, local authorities have been urging residents to evacuate and seek safety elsewhere in such an eventuality.

"But that's easier said than done, and I'm speaking from my own rough experience of evacuating the ward during Typhoon No. 19 last year," said Hiromi Ichikawa, 52, a staffer at Step Edogawa, a nonprofit organization that provides home care support to people with severe disabilities.

Ichikawa recalled studying the typhoon tracking map from three days before it made landfall, and how she struggled to secure the safety of the NPO's some 50 clients with disabilities and their caregivers.

Practically all the clients there were wheelchair users and some were on artificial respirators 24/7. Ichikawa searched in vain for accommodations where they could stay with their caregivers. There were some evacuation centers that could take in people with disabilities, but she was unable to arrange their transportation.

With the exception of just a few people who managed to evacuate to the upper floors of their high-rise condos or other safe places, everyone else ended up hunkering down at home while the typhoon raged.

That harrowing experience prompted Ichikawa and her team to start drills for mass evacuations to Yamanashi Prefecture in early December last year.

"We found out what a tremendous challenge it was to pack and ship supplies for two weeks, not to mention reserving train seats for wheelchair users," she said. "The problems we have yet to work out are endless."

"Inclusive disaster response" is a term that has come into use in recent years. It means leaving no one behind in a disaster. But in reality, that's definitely easier said than done, as everyone has their hands full when trying to save themselves and their immediate families.

And among the elderly and those with disabilities, there are some who are reluctant to go to evacuation centers for fear of "being a burden to other people."

It must be a tough problem in any community. Even as we speak, the weather map shows Typhoon No. 14 steadily approaching.

Every community needs to ramp up their disaster response programs and prepare for the autumn typhoon season.