EDITORIAL: Quad framework must not be just a means to bolster U.S. interests 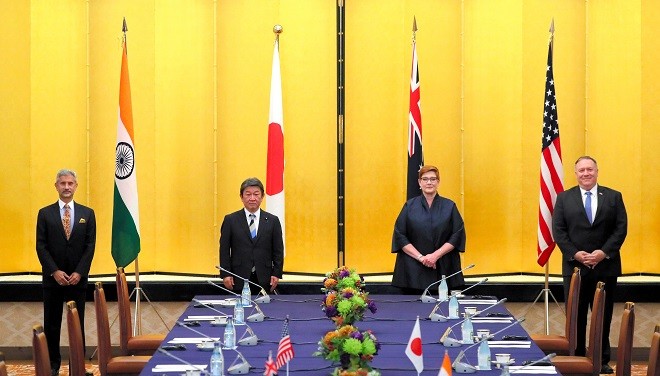 The so-called Quad framework for foreign policy discussions should not merely be a tool for the United States’ battle with China over global hegemony when their rivalry is becoming increasingly intense and acrimonious.

The top diplomats of the four Indo-Pacific nations of Japan, the United States, Australia and India held talks on Oct. 6 in Tokyo.

It was the second Quad meeting of foreign ministers following one held last autumn in New York. The four officials agreed to expand and enhance cooperation among their countries in a broad array of areas including maritime security and the development of high-quality infrastructure to realize a “Free and Open Indo-Pacific.”

It was the first multilateral ministerial meeting held in Japan since the new coronavirus began to spread globally.

The face-to-face meeting among the foreign ministers of the four countries, which share such values as freedom and democracy, to affirm their joint commitment to the principle of developing and maintaining the international order based on rules has a special significance under the current circumstances.

The Quadrilateral Initiative was first proposed by former Prime Minister Shinzo Abe during his brief first tenure, which started in September 2006 and ended a year later, as a strategic response to China’s growing power. Abe devoted a lot of energy to diplomatic efforts to promote this initiative during his second tenure.

Australia and India, however, often displayed a cautious stance toward embracing this framework out of concerns about straining their relationship with China.

But the two countries have agreed to bolster cooperation among the four nations and hold regular meetings of their foreign ministers apparently because of a sense of crisis generated by China’s repeated aggressive actions.

Beijing has no right to react angrily to any move to secure regional stability in response to its naval expansion in the South China Sea and the East China Sea.

But the four countries still have different views about the situation and the strategy to deal with it.

During the Quad meeting, U.S. Secretary of State Mike Pompeo lambasted China’s ruling Communist Party, saying, “As partners in this Quad, it is more critical now than ever that we collaborate to protect our people and partners from the CCP’s exploitation, corruption and coercion.”

With this comment, Pompeo underscored afresh the Trump administration’s hard-line policy toward China prior to the U.S. presidential election in November and made clear Washington’s intention to build an anti-China network of allies.

An anti-China coalition is even more difficult to embrace for India, which has traditionally pursued a policy of non-alliance. New Delhi will continue a balancing act between acting as a member of the Quad and avoiding friction with China as much as possible.

The foreign ministers also agreed to expand cooperation with other countries as well. If so, it is all the more important to draw a line between the grouping’s agenda and the U.S. strategy toward China.

The reality is that many countries, including members of the Association of Southeast Asian Nations, are not willing to clearly take sides with either Washington or Beijing.

The only way for other countries to deal with China is to seek coexistence based on cooperation while trying to discourage Beijing from taking actions to challenge the existing order and making long-term efforts to extract change from the Chinese government.

The U.S. government also seems to want the Quad to grow into a multilateral security alliance. But such a move could intensify tensions and deepen divisions in the region.

The grouping should work as a framework for diplomatic cooperation without wading into the military realm.

It is vital to make such universal values as the rule of law and respect for human rights solidly established and deeply entrenched in this region.

If the four countries fail to act according to these principles, their calls for cooperation will fall on deaf ears.