Suspect ruins defense, says consent not given for first murder 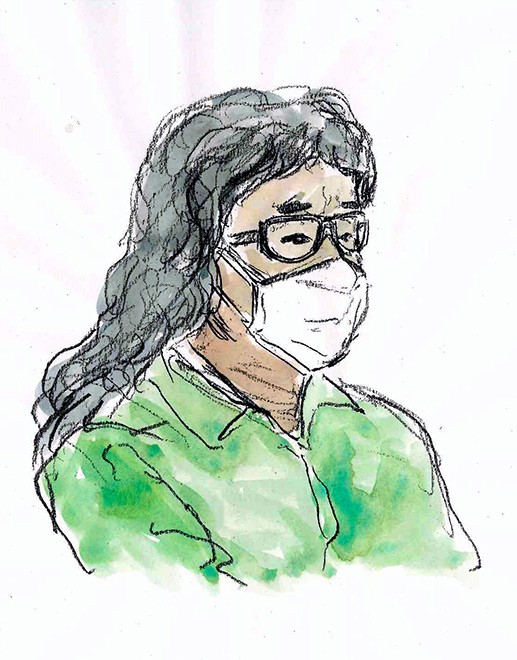 A drawing of Takahiro Shiraishi during the Oct. 7 trial session at the Tokyo District Court’s Tachikawa branch (Image drawn by Masayoshi Koyama)

A suspected serial killer on Oct. 7 refused to answer his lawyers’ questions in court and effectively destroyed their defense by saying his first victim never consented to be murdered.

Takahiro Shiraishi, 29, took the witness stand for the first time at the Tachikawa branch of the Tokyo District Court. He has been charged on multiple counts of murder for robbery and forcible sexual intercourse in connection with the dismembered bodies of eight women and one man found in his apartment in Zama, Kanagawa Prefecture, in 2017.

The trial session began with defense lawyers asking a question, but Shiraishi refusing to answer. When a lawyer asked, “Do you have any intention of responding to our questions?” Shiraishi said he did not.

The judge called a recess after about five minutes, but the defense team had no further questions for the defendant after the trial resumed.

In an interview with The Asahi Shimbun before the trial, Shiraishi said he would admit to the crimes and explained that he was having problems with his lawyers.

His defense team has argued that simple murder charges should not apply in his case because the victims consented to be murdered. The lawyers said the victims were suicidal and willingly went to Shiraishi’s apartment on expectations that he would kill them.

Shiraishi became acquainted with the female victims through Twitter and lured them to his apartment on promises to commit suicide together, according to the indictment.

Prosecutors asked Shiraishi about his first victim, a 21-year-old woman from Kanagawa Prefecture, and how he ended up killing her. He was also asked why he chose people who had indicated on social media that they wanted to die.

“It was easier for me to convince people with worries and other issues and manipulate them to my way of thinking,” Shiraishi said.

He added that he never felt suicidal but pretended to be in order to get to know the woman better.

He explained that he never intended to assist in a suicide and targeted the woman purely to take her money.

He said the woman had set up his stay at the Zama apartment so he killed her to avoid repaying her. He explained that he pushed her down from behind and strangled her.

Prosecutors asked Shiraishi if the woman had ever said that she wanted him to kill her.

When prosecutors pressed Shiraishi about the lack of consent from the woman, he said that was correct.

Regarding why he went on to kill eight others, Shiraishi explained that through the first woman he obtained not only the apartment but about 500,000 yen ($4,700) in cash. That gave him confidence that he could continue to get away with murder and dismembering bodies, he said.

The only male victim was searching for the first victim, who was an acquaintance, and Shiraishi has said he killed him to conceal his crimes.

When asked about the defendant, the mother said: “I want him to disappear from this world right now. I want him to end up like my daughter.”

Partitions were set up in the court to prevent Shiraishi and others from looking at the mother.

(This article was written by Azusa Kato, Naomi Nishimura and Kazufumi Kaneko.)