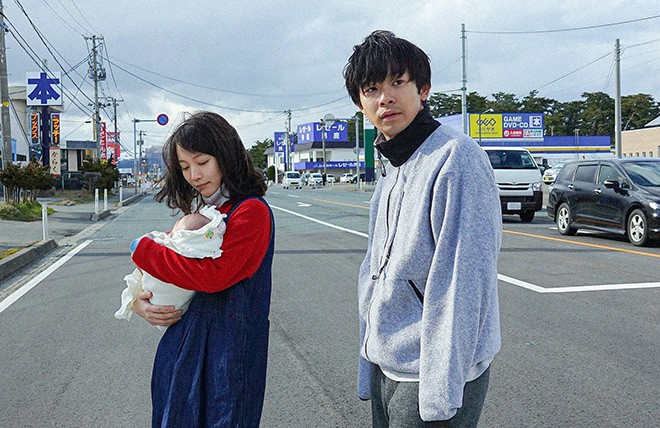 "Any Crybabies Around?" won Best Cinematography at the 68th San Sebastian International Film Festival after it was screened in competition.

Yuta Tsukinaga, 44, served as cinematographer for the film directed by Takuma Sato, 31.

The awards ceremony was held Sept. 26 in northern Spain.

Set in the Oga Peninsula of Akita Prefecture in northeastern Japan, the story captures how Tasuku (played by Taiga Nakano) matures as a responsible father after the birth of his daughter.

Also starring Riho Yoshioka, Ichiro Kan and Takashi Yamanaka, "Any Crybabies Around?" will open nationwide in Japan on Nov. 20.

Tsukinaga previously handled cinematography for Shinji Aoyama's "Tokyo Park" and Tetsuya Mariko's "Ninifuni," both of which were screened at the Locarno International Film Festival in 2011.

Tsukinaga won Best Cinematography at the Mainichi Film Awards for his work in "Mori, The Artist's Habitat," which was directed by Shuichi Okita and released in 2018.

"The sea off the Oga Peninsula and the scenery of the town dwelled by 'Namahage' demons are intense, and when I saw them I had an impression that I could capture something great," Tsukinaga said after he won the prestigious award.

"During cinematography, I tried to bring out the best of the Oga (Peninsula) and sought ways to portray what I felt there, so I hope I could deliver it to the audience even if only slightly," he added.

Director Sato said he was honored to receive such an award even though it was his debut work.

"I never imagined I would be given the award, so I am really surprised but also very happy," he said.

Sato was born in Akita. He came under the spotlight when he won the Cinema Fan and Audience awards at the 2014 Pia Film Festival Awards for his first independent feature "Don't Say That Word."