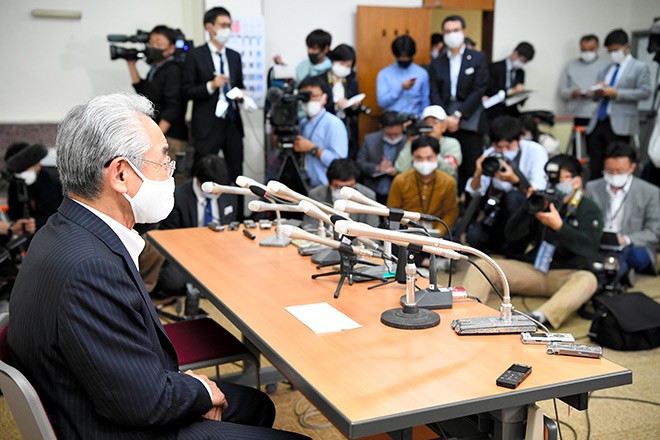 Suttsu Mayor Haruo Kataoka holds a news conference on Oct. 8 to announce that his town would be applying for consideration as the final storage site for nuclear waste. (Kengo Hiyoshi)

Two towns in Hokkaido took the lead in an extremely unpopular contest by announcing they were applying to host a final storage site of nuclear waste.

The struggling municipalities of Suttsu and Kamoenai are the only places in Japan that have so far answered the economy ministry’s call for candidates willing to serve as sites for nuclear waste in exchange for grants.

Unless such storage facilities are constructed and begin operating, Japan’s nuclear plants will run out of storage capacity for nuclear waste on their plant grounds in the near future.

“I want to make the first move,” Suttsu Mayor Haruo Kataoka said at a news conference on Oct. 8 to announce the decision to apply. “I hope to spread discussions about this issue around the nation.”

Suttsu is situated on the western coast of Japan’s northernmost main island.

Kamoenai, located slightly north of Suttsu, announced on Oct. 9 that it was also applying.
The two municipalities will enter the first of a three-stage process to determine if they are appropriate as a final storage site. The entire process can take as long as 20 years.

The first stage normally takes about two years to examine past records about natural disasters and geological conditions for the area.

During that first stage, a municipal government can receive up to 2 billion yen ($18.9 million) in grants from the central government.

After a long period in which no municipality expressed interest in hosting such a facility, the central government in 2017 released a map of areas that were considered scientifically and geologically appropriate as final sites to store nuclear waste.

Kataoka indicated in mid-August that he was interested in applying, and the town government invited officials of the economy ministry and Nuclear Waste Management Organization of Japan (NUMO) to hold explanatory meetings for Suttsu residents.

Some residents expressed opposition to the plan and called for a local referendum. But Kataoka went ahead with the decision because he felt the town assembly was behind him.

The assembly did approve the application measure at an Oct. 8 meeting.

The Kamoenai chamber of commerce in early September also asked the village assembly to consider applying for consideration as a final storage site.

Again, officials from the economy ministry and NUMO held explanatory meetings in the village, and the Kamoenai assembly approved the request at an Oct. 8 meeting.

Grants from the central government will cover the expected decline in tax revenues caused by the effects of the novel coronavirus pandemic.

Kamoenai is already receiving another grant because of its proximity to the Tomari nuclear plant located just south of the village.

Hokkaido Governor Naomichi Suzuki has gone on record as opposing the nuclear waste plans by the two municipalities, but his approval is not required for the local governments to apply for consideration.

(This article was written by Kenji Izawa and Toru Saito.)