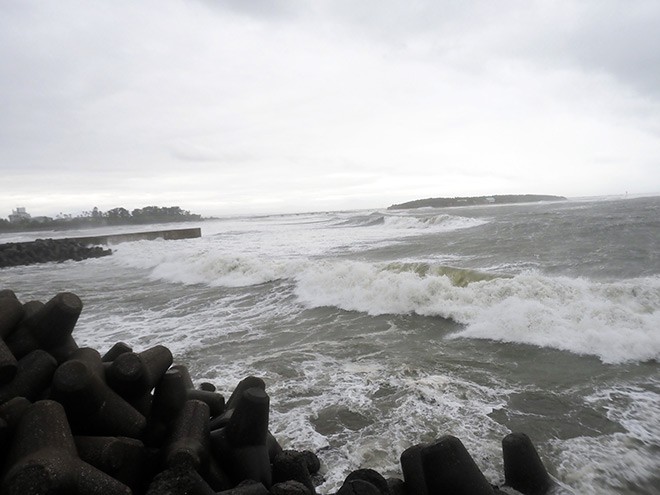 High waves hit Aoshima island and its beach in Miyazaki as Typhoon No. 14 approaches on Oct. 8. (Hideki Yanaru)

Powerful Typhoon No. 14 is expected to approach parts of eastern and western Japan this weekend, packing strong winds and rain and prompting forecasters to issue warnings for some areas.

The typhoon lumbered northward over waters south of the Shikoku region on the morning of Oct. 9. Forecasters expect it to maintain strength and continue eastward, passing the Izu island chain.

It is expected to approach western Japan through Oct. 10, according to the Japan Meteorological Agency (JMA), and then approach the Tokai and Kanto regions from Oct. 10 to Oct. 11.

The typhoon’s journey northward has activated a seasonal rain front, which was already drenching some areas in the typhoon’s path.

In Hachijo, Tokyo, rainfall exceeded 450 millimeters over 48 hours, lasting until the morning of Oct. 9. That marks the highest on record since 2003, when observations there started.

Total precipitation is also rising in Aogashima, Tokyo, and in Izu, Shizuoka Prefecture.

Typhoon No. 14 is slowly moving northeast over water 270 kilometers south-southeast of Ashizurimisaki cape in Kochi Prefecture, as of 10 a.m. on Oct. 9.

The typhoon has a central barometric pressure of 970 hectopascals and a maximum sustained wind of 126 kph near its center.

The JMA is issuing warnings for some areas about high waves and potential landslides due to the storms and heavy rain.

The maximum sustained wind speed expected through Oct. 10 is 90 kph in southern Kyushu, Shikoku, Kinki and Tokai, along with the Izu islands. The maximum wind speed for northern Kyushu and Kanto-Koshin is expected at 72 kph.

Waves are forecast to reach heights of 10 meters through Oct. 10 in southern Kyushu, 9 meters in the Shikoku, Kinki and Tokai regions, 8 meters in northern Kyushu, and 6 meters in Okinawa Prefecture and the Kanto region.

Rainfall for the 24-hour period until noon on Oct. 10 is forecast at 400 mm in the Tokai region, 300 mm in the Kinki region, 200 mm for the Shikoku region as well as the Izu island chain, and 150 mm in the Kanto-Koshin region.