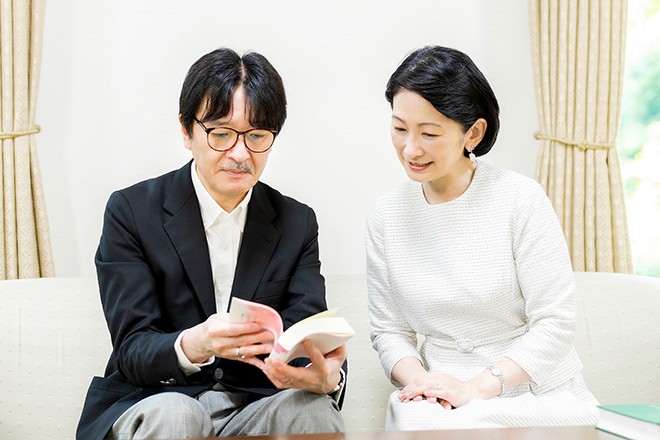 Crown Prince Fumihito, left, and his wife, Kiko, in August (Provided by the Imperial Household Agency)

Crown Prince Fumihito will be fully recognized as the first in line to succeed his brother, Naruhito, as emperor on Nov. 8.

A special committee for the ceremonies, chaired by Prime Minister Yoshihide Suga, on Oct. 8 announced the rituals, called Rikkoshi no Rei, will be held that day.

The new schedule was finalized at a Cabinet meeting on Oct. 9.

The rituals were initially scheduled in April but have been postponed due to the novel coronavirus pandemic.

Rikkoshi no Rei is the last of the series of events that have been held since Emperor Akihito’s abdication in April 2019, which resulted in his oldest son, Naruhito, ascending to the Chrysanthemum Throne.

The rituals will be held in the Matsu-no-Ma state room within the Imperial Palace.

Fumihito is expected to declare his elevation to the role of crown prince in a ritual called Rikkoshi Senmei-no-Gi.

He will then thank the emperor and empress, who will then speak to Fumihito in a ritual called Choken-no-Gi.

To lower the risk of the virus spreading, only about 50 people will be invited to the Rikkoshi Senmei-no-Gi. A court banquet will not be held.

All attendees will be required to wear a face mask, except the emperor, his wife, Masako, the crown prince and his wife, Kiko.