In a first, Kawasaki to ask Twitter to delete two racist posts 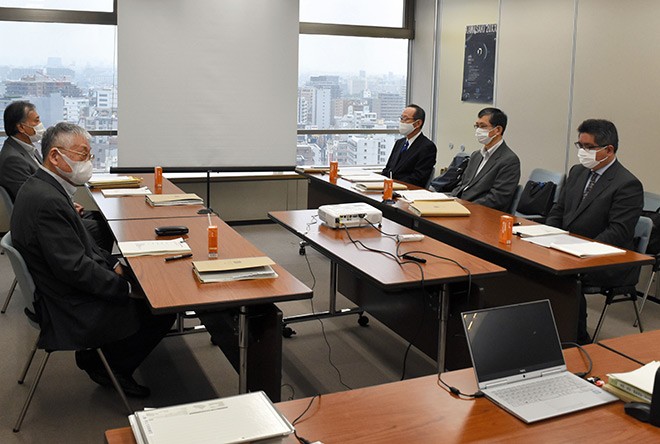 A panel set up by the Kawasaki city government meets on Oct. 9 to submit its findings about internet tweets considered to be hate speech. (Kaname Ohira)

KAWASAKI--City authorities here will take the unprecedented step of asking Twitter to delete two posts defined as hate speech, but the target of the hateful comments complained that things are not moving fast enough.

Kawasaki with its sizeable population of ethnic Koreans has been at the forefront of passing ordinances to create a discrimination-free environment.

One such ordinance includes criminal penalties for espousing hate speech in public.

An ordinance that went fully into effect from July also has a provision in which residents who feel targeted over the internet by hate speech can ask the city government to take action.

Choi Kang-ija, 47, an ethnic Korean woman living in Kawasaki who has long campaigned against hate speech targeting minorities, is often targeted and told to leave the city and Japan.

Although there are no criminal penalties against hate speech over the internet, a panel under the mayor does have the authority to look into specific tweets and other posts to internet bulletin boards to determine if they constitute hate speech.

In July, the panel was asked by the city government to look into nine specific posts against Choi. The panel found all nine to include inappropriate discriminatory words. But seven of the posts have already been taken down, so the panel could only recommend that the city government seek to have the two still on the internet removed.

The recommendation submitted on Oct. 9 to the city government said the two tweets should be deleted. This would be the first time for the municipal government to take such action.

City government officials said they would ask Twitter as soon as possible to delete the offending tweets.

The problem is that Choi had informed the city government that she had come across at least 300 tweets and posts on the internet she found racist.

Moreover, she and her lawyers first approached the city government about the hate speech between May and June.

Yasuko Morooka, the lawyer who has handled many hate speech cases, said the city government response was too slow.

“What is needed to provide relief to those who have suffered over the internet is swift deletion” of the tweets, Morooka said.

In addition to the recommendation to delete two tweets, the city government also decided to ask the panel to look into five additional egregious posts. The other 280 or so questionable tweets are being ignored.

Choi was also at the Oct. 9 news conference with her lawyers and she could not hide her disappointment.

“I had hoped that with the passage of the toughest ordinance in Japan here in Kawasaki those who could not raise their voices would finally be able to receive some help,” she said. “However, the ordinance has still not kept up with the actual damage.”

City government officials acknowledged that a great number of offensive posts were circulating, but cited concerns about violating the freedom of expression in moving cautiously to clamp down on the posts.

Morooka complained that bureaucratic red tape on the part of the Kawasaki city government was way too slow.

“For people like Choi, who are in effect being lynched on the internet, relief simply is not possible if certification (of discriminatory remarks) only comes after a long period of discussion,” Morooka said.

(This article was compiled from reports by Kaname Ohira and Hiromi Saito.)