A Godzilla attraction that opened in Awajishima island in Hyogo Prefecture includes a related museum and theater. (Video by Nobuhiro Shira and Takaharu Yagi.) 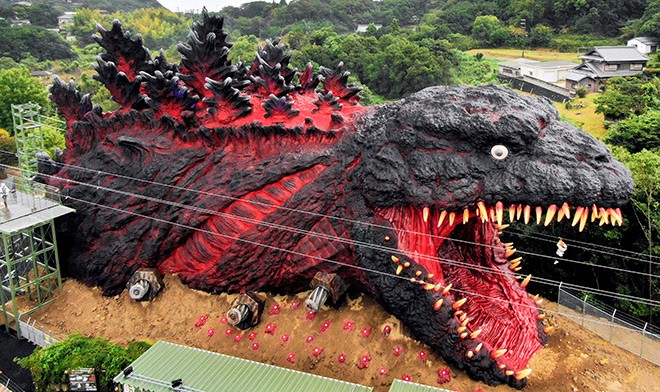 Visitors to the Godzilla attraction can enjoy two types of adventure activities at Nijigen no Mori anime park in Awajishima, Hyogo Prefecture. (Image taken with a drone by Nobuhiro Shirai)

AWAJI, Hyogo Prefecture--Godzilla has been spotted at a prefectural park here, but instead of fleeing in fear, adventure-goers can battle the mighty monster.

The "Godzilla Interception Operation" attraction at the Nijigen no Mori anime park in the Hyogo prefectural Awajishima park opened on Oct. 10.

Visitors can try to save the day by engaging the mammoth Godzilla whose lower body is trapped in a pit after it invaded this island.

News outlets on Oct. 8 got a sneak preview of the interactive "life-size" Godzilla attraction that allows thrill-seekers to enter the prehistoric creature and shoot away at its "cells."

Despite its predicament, Godzilla still inspires fear with its ferocious bared teeth, massive maw and sheer size. Its upper body is about 55 meters long, 23 meters high and 25 meters wide.

“Combatants” enter the body of Godzilla by sliding down a zipline. They can also partake in a shooting game to stop the spread of Godzilla's cells.

The attraction includes a museum and theater dedicated to the long-running movie icon.

To enter the interactive Godzilla attraction, one is required to be at least 110 centimeters tall and weigh at least 25 kilograms and less than 110 kg.

The Godzilla-themed facilities were opened by a subsidiary of the human resources company Pasona Group Inc.

The group announced in September that some 1,200 employees of its group companies will be transferred to Awajishima from Tokyo by 2024 following the relocation of their main functions to the island.