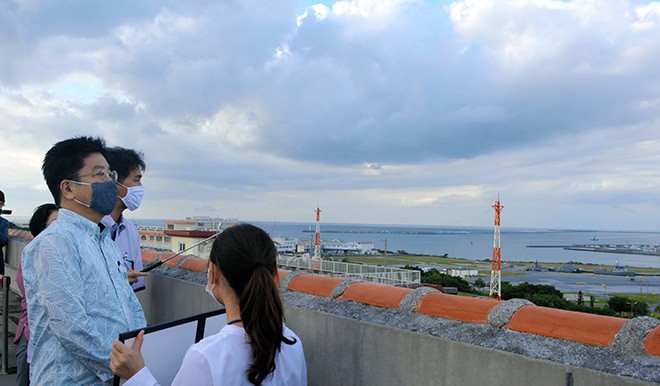 NAHA--New Chief Cabinet Secretary Katsunobu Kato got an aerial view of the U.S. bases in Okinawa Prefecture on Oct. 10, but the new perspective didn't change his stance on the contentious relocation of an airfield.

Kato's meeting with Okinawa Governor Denny Tamaki failed to find common ground between the central government and the southernmost prefecture on the relocation of U.S. Marine Corps Air Station Futenma in Ginowan.

It marked Kato’s first trip to Okinawa since he became the central government’s most senior spokesman under the administration of Prime Minister Yoshihide Suga, which was formed in September.

Kato inspected the Futenma air station and the site for reclaiming land where work is under way off the Henoko district of Nago, among others, from aboard a Self-Defense Forces helicopter.

The central government is pushing the project to move the functions of the Futenma facility to a new base under construction off Henoko.

Kato reiterated the central government’s position to reporters that the Futenma airfield must be closed due to its dangerous location, sited in a heavily populated area of Ginowan.

“We should not allow the Futenma base to be permanently installed in the middle of an urban area,” he said. “This is a thought shared by all people.”

Tamaki and a majority of Okinawans support the Futenma airfield’s closure, but not the relocation to a new site within the prefecture, which has been asserted in gubernatorial elections and a prefectural referendum.

At their meeting, the Okinawa governor urged Kato to start talks over a review of the relocation plan.

“The central government should abandon the plan to move the Futenma facility to the Henoko district and promptly set up a venue for talks with Okinawa Prefecture,” Tamaki said.

In reply, Kato repeated the central government’s stance, leaving no room for review.

“To maintain deterrence by the Japan-U.S. alliance and remove the danger of the Futenma base, the only solution will be relocating it to the Henoko district,” he said.

Asked by reporters about his take on Suga’s comment that suggested the central government will “link” the provision of public funds to the prefecture with its cooperation over the U.S. base issue, Kato offered his interpretation of the remark.

“I believe that Suga used the word 'link,' meaning that it is an important issue his administration will deal with comprehensively by proceeding with the project to return the land for U.S. bases to Okinawa Prefecture, as was planned, and use the returned land for development effectively.”

When Suga doubled as chief Cabinet secretary and minister in charge of easing Okinawa’s burden to host U.S. military bases, he frequently used a carrot and stick approach to win the support of localities over the base relocation issue.