Pride House for LGBT support opens in Tokyo ahead of Games 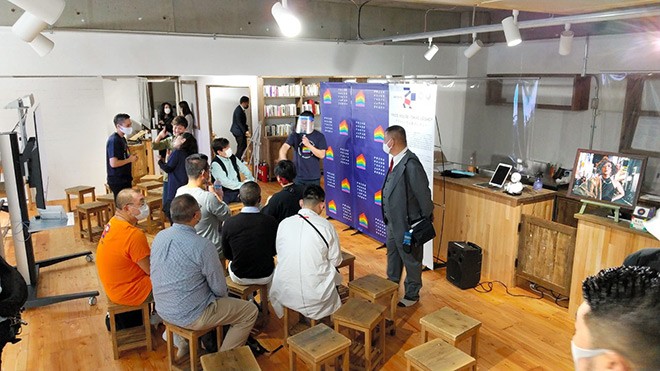 A sexual minority support center opened in Tokyo's Shinjuku Ward on Oct. 11 for holding official programs for the 2020 Olympic Games, which is promoting “diversity and harmony” as a key concept.

Pride House Tokyo Legacy, which will hold official events as part of the Olympics and Paralympics next summer, will remain as an LGBT center after the Games end, the first Pride House established to be made permanent.

“We'd like to provide new opportunities to let people learn more about issues including sexual minorities, education and sports,” said Gon Matsunaka, 44, who heads the facility, at an event to open the center on the day. “Sexual minorities are hard to recognize from their appearance, and they have been ridiculed and discriminated against.”

“By raising awareness of the issue, I hope it will also lead people to pay more attention to those who suffer from other kinds of discrimination, such as ethnic and religious prejudices.”

Pride Houses, which debuted at the 2010 Vancouver Winter Olympics, have since been set up at other Games, but the Tokyo facility will be the first permanent facility, according to the operator of Pride House Tokyo Legacy.

A Tokyo 2020 organizing committee official also gave a speech celebrating the opening of the center at the event.

Thomas Bach, president of the International Olympic Committee, said in a message that he hoped the activities at the facility "will be successful and become a legacy of the Tokyo Games.”

Numerous nonprofit organizations and companies sponsoring the Olympics that have supported sexual minorities are participating in the operation of Pride House Tokyo Legacy.

Pride House's activities, which include providing assistance to sexual minorities and holding seminars to increase supporters, are being financed through dormant bank accounts that have been made available and corporate sponsorship.

A multipurpose space, cafe area and a consultation booth are contained within the 140-square-meter facility, along with numerous books on sexual minorities.

Some citizens in Japan have been calling for the establishment of an environment that allows more sexual minorities to participate in the sporting world.

Nearly 30 percent of about 10,000 coaches in Japan acknowledged the presence of sexual minorities in sports they coached, according to a survey conducted by the Japan Sport Association in 2018.

But the survey also found many in the sports world lacked sufficient understanding about sexual minorities.

Sexual minorities in Japan, especially transgender people, who identify as being a different gender than assigned at birth, face great difficulty in sports, as it is assumed that men and women must participate and compete separately.

Pride House Tokyo Legacy, which was temporarily closed on Oct. 12, will be open from 1 p.m. to 7 p.m. on Mondays, Fridays, Saturdays and Sundays throughout 2020.

From next year, it plans to extend its opening days and hours. It is available for anyone to use free of charge.

(This article was written by Naomi Nishimura and Shinichi Chubachi.)