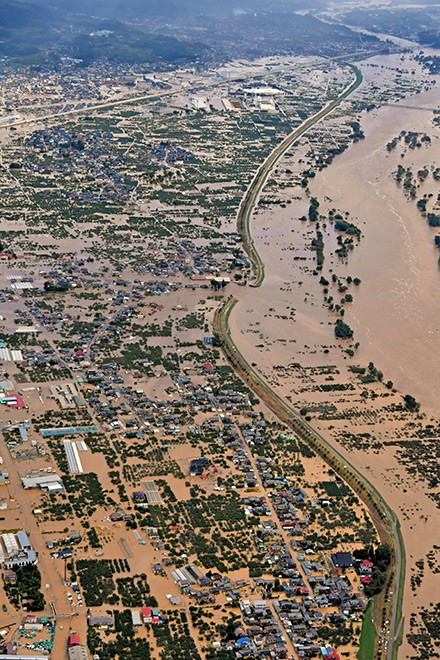 Residential areas are flooded in Nagano in October 2019 after the Chikumagawa river, right, overflowed due to Typhoon No. 19. (Asahi Shimbun file photo)

Typhoon No. 14 dumped heavy rain on Tokyo’s Izu island chain and elsewhere as it moved over waters south of Japan’s main island.

The Japan Meteorological Agency issued a special heavy rain warning to Miyakejima and Mikurajima, part of the island chain.

The storm did not cause any fatalities, but the typhoon season is not yet over. The nation should remain prepared to prevent damage.

Oct. 12 marked one year since Typhoon No. 19 made landfall in the nation, which left more than 100 people dead or missing, mainly in eastern Japan. It caused many rivers, including the Chikumagawa river in Nagano Prefecture, to overflow and countless people to be trapped in homes and other buildings due to flooding.

Lessons from recent disasters have made meteorological observatories and the land ministry’s regional development bureaus to act quicker in urging residents to prepare for evacuations at news conferences.

With the nation struggling to ride out the novel coronavirus pandemic, quick and well-planned release of information is vital for preventing crowding and confusion at evacuation centers.

The Cabinet Office is currently working on a radical overhaul of the system to issue evacuation warnings.

In August, a working group under the government’s Central Disaster Management Council released an interim report that called for issuing a new evacuation instruction at a time when an evacuation recommendation is issued under the current system.

The government plans to revise the law for the reform during next year’s ordinary Diet session so that the new system will be in place by the rainy season.

Actually, an evacuation recommendation is intended to call on all people in high-risk areas to seek shelter. An evacuation instruction is a warning to indicate a high likelihood of a disaster and strongly urge local residents to flee to safety again.

The proposed integration of the two levels would help reduce the number of people who are unwilling to take action until an evacuation instruction is issued. The government should take effective measures to make the change widely known under a carefully developed plan.

To deal with this problem, the Meteorological Agency needs to provide warning information early so that local governments can issue well-targeted evacuation warnings by assessing disaster risks for each area and region.

The working group’s interim report also called on the government to reconsider another category of evacuation warning, “instructions to prepare for evacuation and start evacuating elderly and other vulnerable people,” a level one notch lower than the “recommendation.”

Critics say it is unclear who this warning is directed at and what kind of actions it actually calls for.

Besides elderly people, those who live far from evacuation centers or in areas designated to be at high risk of being hit by a landslide should evacuate their homes in this stage. This should be made clear by changing the term and making other improvements.

In a separate move, a new five-level system was introduced last year for disaster and meteorological alerts.

It is not advisable that disaster warning systems designed to protect human lives are frequently reviewed or made more complicated.

The government should design an effective system and maintain it over the long term.

Residents, of course, should be well-prepared. Administrative information and residents’ appropriate responses are essential to prevent any cases where people failed to escape in time.