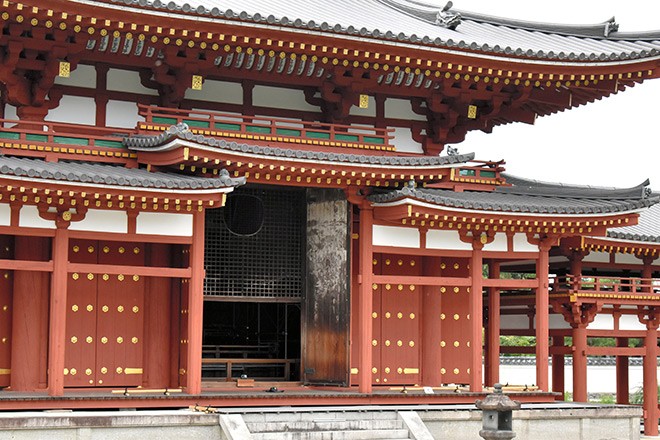 A drawing of Buddhist saints was found on one of the original doors on the eastern side of Byodoin temple’s Hoo-do (Phoenix Hall) in Uji, Kyoto Prefecture. The door was attached to the right side before being replaced during the Edo Period (1603-1867). This photo was taken on Oct. 6. (Yoshiaki Konishi)

UJI, Kyoto Prefecture--A drawing of bodhisattva Buddhist saints was found to adorn one of the original wooden doors of the famed Hoo-do (Phoenix Hall) of Byodoin temple here that had been kept in storage for more than three centuries.

The door, like its counterpart, is believed to have been fashioned when the Phoenix Hall was constructed during the Heian Period (794-1185). The openings were attached to the center of the hall, but replaced with the ones that currently stand during the Edo Period (1603-1867), the temple announced Oct. 12.

The temple complex is a World Heritage site.

Paintings that adorn the hall's doors and walls are designated as a national treasure. The new discovery is also worthy of the designation, according to an expert.

The double door on which the drawing was found is 4.7 meters tall and 1.6 meters wide.

Temple records show that the doors were attached to the center front of the eastern side of the Phoenix Hall but replaced in 1670. Since that time, they have been stored on the premises of Byodoin temple.

The temple and the Tokyo National Research Institute for Cultural Properties made a study of the doors funded by a subsidy from The Asahi Shimbun Foundation. Photos taken by emitting optical beams obliquely to both doors show slight bumps that indicate the lines of the drawing, which is invisible to the naked eye, on the back of one of them.

Further examination revealed multiple flying Buddhist saints drawn near the center of the door on the northern side. The examination also turned up paintings of buildings and mountains drawn on the other door, which is severely damaged.

The temple believes the drawing is of “Raiko Zu,” which depicts Amitabha, the principal Buddha in Pure Land Buddhism, and Buddhist saints welcoming the spirits of the deceased, given that “Kuhon Raiko Zu,” a national treasure, is drawn on the doors and walls of the Phoenix Hall.

The Kuhon Raiko Zu is a painting of nine class-based welcomes, in which each welcome is based on what the individual did in life.

“The drawing on the door is thought to be ‘Jobon Josho Zu’ (Painting of the uppermost class in the uppermost category), which was drawn when the Phoenix Hall was constructed and the oldest Raiko Zu in the country,” said Makoto Kasuya, a former professor of art history at Nara Women’s University. “It is a national treasure class painting.”

The photos taken for the study and an image of the discovered drawing are on public display at the temple's museum.

(This article was written by Yoshiaki Konishi and Rikako Takai.)