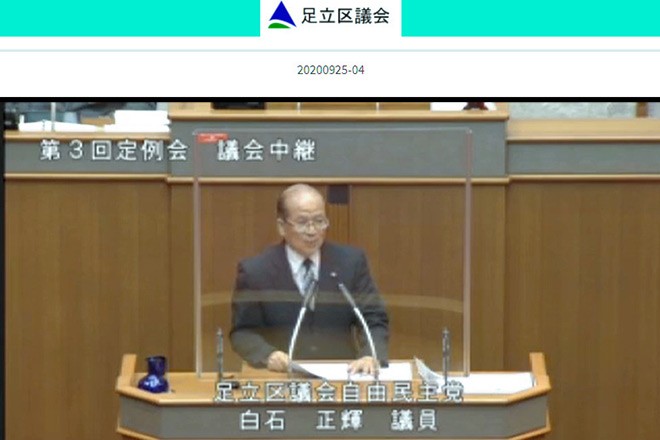 An assemblyman in Tokyo, under fire for weeks for saying the spread of homosexuality could destroy his ward, has finally accepted demands that he apologize and retract his remarks.

Masateru Shiraishi, 78, a Liberal Democratic Party assembly member of Adachi Ward, will offer the apology and withdraw his remarks at an Oct. 20 plenary session of the assembly, according to the assembly’s website.

“Once again, I deeply apologize to the many people who have been hurt by Shiraishi’s remarks,” Akira Shikahama, the assembly’s chairman, said in a statement on the website released on Oct. 12.

During a ward assembly session on Sept. 25, Shiraishi asked about the treatment of sexual minorities in relation to children’s education and the falling birthrate.

His comment drew immediate protests and an online campaign demanding his resignation.

Shiraishi had told The Asahi Shimbun that he has no intention of withdrawing the remarks or apologizing.

However, Shikahama’s statement said the assembly member bent to the chairman’s strong demands to apologize and retract the comments in public.

Shiraishi is not the first LDP member to make discriminatory remarks about sexual minorities.

Mio Sugita, a Lower House member of the ruling party, came under heavy criticism in 2018 for writing an article in a monthly magazine that effectively said same-sex couples are unproductive because they do not reproduce.