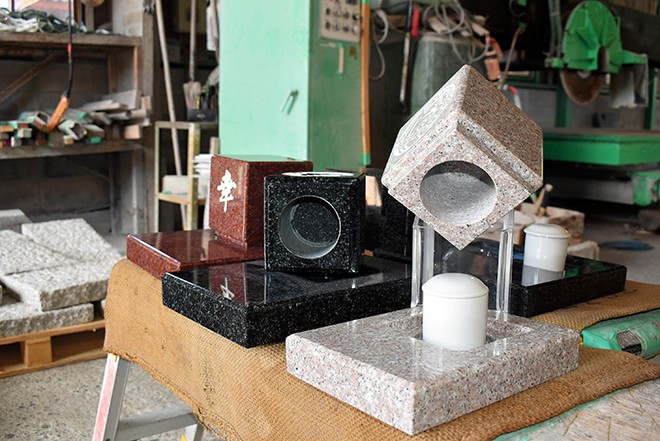 Takubo, a small gravestone designed to keep ashes of the deceased at home, sold by Urabe Sekizai Kogyo, a company in Toyosato, Shiga Prefecture (Yoshichika Yamanaka)

Many Japanese are abandoning the tradition of visiting and maintaining the graves of their ancestors, an often costly and time-consuming endeavor, and setting up small shrines to them at home instead.

The practice of “haka-mairi,” where one visits the graves of relatives to offer flowers and sticks of incense, has long been a regular activity for Japanese.

But the gradual disappearance of households containing multiple generations, replaced by those consisting of single families or single residents has chipped away at the tradition, with many being forced to move a family grave to a different location or close it due to costly maintenance.

Many tasked with looking after the grave of a relative have wondered whether there was another way to pray for the repose of their souls and hold memorial services that involved bearing less of a burden.

For elderly city dwellers, an even more desperate and crucial question has been, who will take care of the grave after I die?

Nagoya resident Noboru Goto, 68, faced that question five years ago, when he was diagnosed with stomach cancer and told he had a year to live.

He was worried about the future of his ancestral grave, which was located in eastern Gifu Prefecture, a 90-minute drive from where he lived.

Goto didn't want to impose the burden of taking care of the grave on his wife Kayoko, 69, and their two sons, both in their 40s, so he decided to close the grave.

But later he saw a newspaper article about a small gravestone designed to be placed at home with a price tag of only about 70,000 yen ($664) sold by Urabe Sekizai Kogyo, a company in Toyosato, Shiga Prefecture, and bought one three years ago.

The compact block-shaped gravestone--14-cm high, 12-cm long and 12-cm wide--has since been sitting on a table in a sunny room on the second floor of his home.

“This room for us has a lot of memories,” Goto said, explaining his decision to place the gravestone there.

The word “kansha” (appreciation) is engraved on its surface as well as an opening into which an urn 6-cm wide and 7.5-cm high can fit. The gravestones also come with a stand for incense sticks.

The novel coronavirus pandemic, which has hindered people's ability to travel freely, has added another layer of difficulty for Japanese looking to pay their respects to deceased relatives.

“After one of us dies, the remaining one will remember the other in this room, by looking at the marker,” Goto said.

Hiroki Urabe, the 48-year-old president of the company that manufactures and sells Takubo, said that he came up with the idea after business at the company, established in 1882, which mainly manufactured traditional gravestones and stone materials for housing, fell off.

During Japan's asset-inflated economy, the company sold 20 or so gravestones a month, propelling annual sales to about 100 million yen.

But Urabe’s business took a hit due to a recent shift as lifestyles changed, and sales dropped to one-tenth of their peak period.

To remain competitive, Urabe started thinking about developing a product that would meet demand for a gravestone that is easy to maintain and allow people to keep the ashes of their beloved ones closer.

He confirmed with authorities that it would be legal for people to keep cremated remains at home instead of using a cemetery and began selling the compact gravestones five years ago.

Soon the company started receiving 10 orders or more a month. Nowadays, it takes one to two orders a month. Many of the customers are elderly residents in Tokyo and urban areas in Kyoto and Aichi prefectures.

Two years ago, the company started selling another product called “Takubo for a husband and a wife,” which holds the ashes of two people.

The item proved to be a big hit, particularly among those who say, “I don’t want to be buried in the grave where my mother-in-law has been buried,” Urabe said.

When a Takubo owner becomes unable to take care of the gravestone due to losing a family member or other reasons, they can ask the company to dispose of it.

The coronavirus pandemic has bolstered orders of Takubo, Urabe said, as people are avoiding funeral and memorial services that attract a crowd, a risk of contracting the virus.

“Those who don’t need a traditional gravestone still want to give the deceased a decent burial, and Takubo serves their needs,” Urabe said. “I'd like more people to know about this is, as a new way of commemorating the dead.”

With the greying of society, more people are deciding to move their ancestors’ ashes from a traditional family grave to a charnel house or a similar facility.

Doing so frees them from the duty of managing a family grave that more often than not is located far from where they live.

There were roughly 70,000 cases of people relocating ancestors' ashes in fiscal 1997, according to a health ministry survey. But that spiked to approximately 120,000 in its fiscal 2018 survey.

Storing ashes at home and other places has also become more common.

The move began around 2005, according to a Kyoto-based group that promotes the practice.

Keeping ashes in a pendant has become especially popular, the group said.

Funeral services companies sell about 100,000 items a year to cater the needs of people who keep ashes of their loved ones close or at home, the group said.

“There are more and more senior citizens who lack economic resources. Commemorating the deceased without spending too much money fits with the times,” said Joji Yamazaki, 70, who heads the group.

“Many temples in countryside struggle with finding an heir. In some regions, temples themselves are having difficulties taking care of gravesites,” said an official of the Japan Buddhist Federation, a Tokyo-based organization consisting of 106 organizations and groups that include 60 religious sects.

The official said they welcome new and alternative ways to pay respect to the ancestors that are “realistic and appropriate to the realities of each region.”

“We can’t go against the times,” said Katsuyuki Iba, 55, an executive director of the Tokyo-based Japan Stone Industry Association, echoing the official’s sentiment. “We should welcome the handy ways that people use to commemorate the deceased.”

Iba, however, offered one caution over keeping the remains of relatives in portable gravestones.

“When the ashes are portable, it makes easier for people to simply dump them somewhere, which is illegal,” Iba said. “I urge consumers to have an awareness and manage (the ashes) properly.”

Journalist Hajime Himonya, 74, who specializes in covering funerals, said portable gravestones like Takubo are “one of many various funeral options that people have chosen in recent years, such as scattering ashes and planting trees instead of a traditional burial,” and predicted the trend will continue.