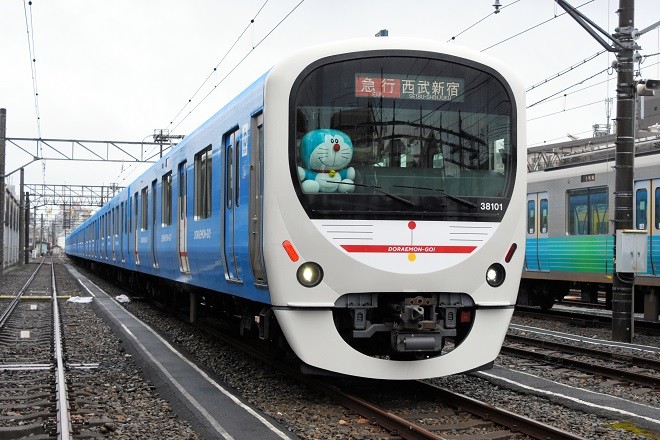 The “Doraemon-Go!” train, seen here Oct. 8 in Tokyo’s Nerima Ward, has been decorated on the theme of Doraemon the robotic cat to mark 50 years from the start of the famed manga series. (Yuta Ichijo)

Fifty years into his debut, it's doubtful that Doraemon has his very own train in his magical pouch of gadgets.

But now the eponymous robotic cat does, as Seibu Railway Co., which primarily serves the northwestern suburbs of Tokyo, began operating one on Oct. 8.

The decorated train themed on Doraemon commemorates the 50th anniversary since the highly popular manga began serialization in magazines.

Media representatives were given a sneak peek on Oct. 8 in Tokyo of the exterior and interior of the train, which goes by the name “Doraemon-Go!”

“Go” is a suffix that is often used in Japanese at the end of the names of trains, vessels and other vehicles.

Just like the robotic cat, the eight-car Doraemon-Go! has a base color of blue across the exterior of its cars, with the front of the lead car and the passenger doors each designed to look like Doraemon’s face.

In the car interiors, partition boards that flank long seats are each decorated with an image of Doraemon, whereas images of the robotic cat’s four-dimensional pouch, from which magical gadgets are taken out, are arranged on the backrests of the long seats.

The doors between cars are each designed to look like the Anywhere Door, one of Doraemon’s gadgets that allows you to go anywhere you want.

The decorated train will be operated along Seibu Railway’s Shinjuku, Haijima and Tamako lines for the time being, although it will not be operated every day, officials said.

Seibu Line App, a smartphone app offered by the railway company, allows a customer to learn near which station the decorated train is running.