Uighur mosques closed by Beijing, handed over for tourist use 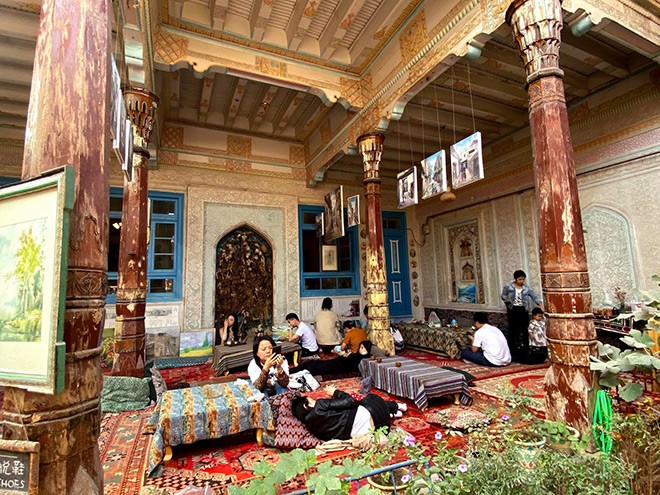 Visitors rest and relax in what was once a prayer room of a mosque in Kashgar in the western part of the Xinjiang Uighur Autonomous Region. (Atsushi Okudera)

KASHGAR, China--At a domed building here in early October, the Islamic crescent symbol that indicated it had been a mosque had been removed.

The interior of the building had also been radically altered into a cafe.

What had once been a large prayer room had been turned into a rest area for tourists. Visitors who appeared to be Han drank tea or laid down to rest.

A source said the operator of the cafe was a Han from Guangdong province who began operations in May 2019 after rebuilding what had once been a house of worship.

One local resident was obviously upset that mosques in Kashgar were being turned into restaurants and rest areas.

“We are afraid to pray outside of our homes so we all gather at home to offer prayers,” the resident said.

Chinese authorities have moved to close a large number of mosques used by ethnic Uighurs in the Xinjiang Uighur Autonomous Region.

In both the region capital of Urumqi and Kashgar in the western part of the region, a number of mosques had been converted into cafes and other tourist destinations for Han Chinese.

And Beijing has not stopped at religious institutions. In what was described as a state project to turn the ancient city of Kashgar into a major tourist destination, parts of the city where homes and other buildings were constructed in the traditional Uighur style has been torn down and rebuilt over the past decade.

According to local residents, a large number of small and midsize mosques that were scattered around the old part of town have been closed over the past two to three years.

Another building about a minute’s walk from the former mosque also had part of its tower demolished and the former place of worship had also been turned into a cafe.

Another mosque in the eastern part of the residential district had been converted into a souvenir shop offering jade products.

Of the six mosques visited in the old city of Kashgar, five had been closed.

A study by the Australian Strategic Policy Institute (ASPI) found a similar trend in other parts of the Xinjiang Uighur Autonomous Region.

In a report released in September, ASPI made a comparison using satellite images. A sample of 533 mosques out of the 24,000 or so in the region was selected. Since 2017, about 65 percent of the mosques had been either demolished or reconstructed for other purposes.

Violent clashes between Uighurs and Han in the past has led Beijing to strengthen its oversight of Islam. One method used is the Sinicization of the religion.

A researcher in a Communist Party organ in Xinjiang issued a report in 2015 that said, “The number of mosques in Xinjiang greatly exceeds the number needed for ordinary religious activities and some have become bases for separatists and radicals.”

A similar picture was also seen in Urumqi.

The metal gate to one mosque was closed and crescent symbols had been removed from the top of the columns that are an architectural feature of mosques. Peeking over the gate found construction materials and garbage strewn within the building.

A Uighur man who once prayed at the mosque said, “During the New Year, so many Muslims gathered there that some had to pray outside the building because not everyone could get in.”

According to a Communist Party official of the committee with jurisdiction over the district where the mosque is located, the building was designated in 2017 as dangerous because it did not have sufficient anti-quake measures. The official said the mosque was closed to protect the lives of residents.

Another mosque in the Shuimogou district had also been closed a few years ago because it was also classified as dangerous.

The ASPI study found that 35 percent of the mosques in Urumqi and 46 percent in Kashgar had been either demolished or reconstructed. The ratios were relatively low because domestic and foreign tourists often visit the two cities.

However, in rural areas in the north and south of the autonomous region about 80 percent of the mosques have been demolished.

A male ethnic Hui who said he was Muslim indicated that the mosque closures were meant to give Chinese authorities greater control.

“Closing the smaller mosques and forcing people to gather in larger mosques may make it easier to manage the people,” the man said.

There were other signs that Beijing was implementing Sinicization of the mosques.

One mosque in Urumqi prominently displayed not only the Chinese flag, but also displayed banners with the core values of the Chinese Communist Party.

Since the 2015 party decision to promote the Sinicization of religions, mosques have begun putting up banners calling for “ethnic solidarity” and pursuing “the Chinese dream.”

A visit to Hainan island in southern China in September led to a mosque that displayed not only a photo of Chinese President Xi Jinping, but also a sign urging visitors to read and study from his writings.

The intensified crackdown on Uighurs dates to around 2009 when about 2,000 people were killed or injured in violent clashes between Uighurs and Han Chinese in Urumqi. Subsequent violent acts in other parts of China were designated by authorities as terrorist acts plotted by those seeking Uighur independence.

Western nations have criticized the detention of Uighurs in what has been described as concentration camps as gross human rights violations.