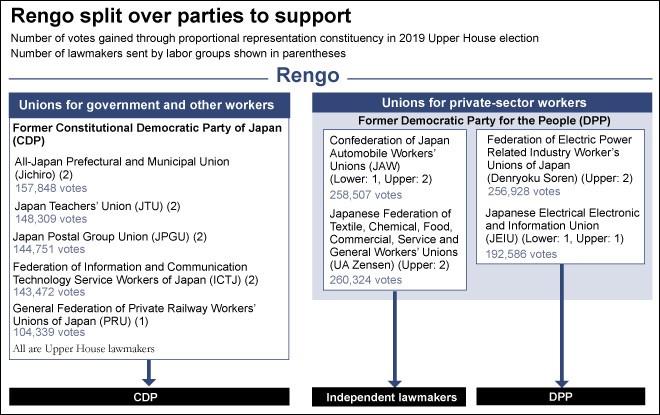 The merger of two opposition parties was supposed to create a united force that could take on the ruling coalition, but one of the opposition bloc’s main supporters remains divided.

Rengo, the Japanese Trade Union Confederation, decided on Oct. 15 to support not only the Constitutional Democratic Party of Japan (CDP) but also the Democratic Party for the People (DPP) in the next Lower House election.

Two parties with those same names merged in September to form the new CDP, the largest opposition party. Rengo on Sept. 17 announced that it would back the new CDP in the next general election.

But the merger wasn’t entirely complete, and a number of lawmakers and other members remained in the DPP to continue its existence.

Some labor unions under the umbrella of Rengo had supported such DPP politicians and expressed their desire to keep backing their candidacies.

So Rengo’s executive committee on Oct. 15 approved a modified draft that said the organization as a whole will support the CDP in the proportional-representation constituency in the next election, but it will also assist the DPP based on unions’ relationships with the party’s lawmakers.

It will also help suitable independent lawmakers recommended by Rengo members, according to the draft.

In the Upper House election in summer 2019, Rengo’s support was split between the two parties, which led to confrontations between labor unions representing different industries.

The labor organization had been urging the old CDP and the old DPP to join hands to prevent another split in support.

But labor unions that had backed the old DPP oppose some of the policies of the new CDP, including its opposition to nuclear power generation.

Nine lawmakers backed by Rengo remained in the DPP or became independent. The labor organization decided it could not just abandon them for the new CDP.