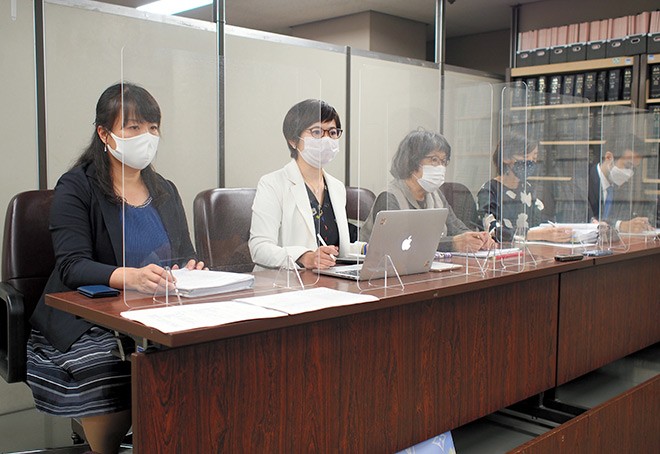 Lawyers representing plaintiffs who filed a lawsuit against St. Marianna University School of Medicine for discriminating against women in its entrance exams hold a news conference in Tokyo on Oct. 14. (Tomomi Abe)

Four women who took entrance exams for St. Marianna University School of Medicine filed a lawsuit at the Tokyo District Court on Oct. 14, accusing the institution of sexual discrimination and demanding compensation.

Similar lawsuits have been filed by those who took entrance exams for Tokyo Medical University and Juntendo University since 2018, after it became known that the medical schools illegally rigged test scores to disadvantage female applicants.

The four women, all in their 20s, said the admission process of the university in Kawasaki was unjust and unfair for them, and demanded the institution to pay a total of 16.84 million yen ($160,000) in damages.

The sum includes 3 million yen in compensation for each plaintiff per exam, their lawyers said.

The women took exams to enter the university between fiscal 2015 and fiscal 2018.

One of the plaintiffs, who lives in western Japan, took a test for fiscal 2018. She passed the first-round exam but received a rejection letter after the second-round test.

According to a report written by a third-party panel that the university set up after the rigging scandal came to light, the point allocation of the second-round exam, partly based on application forms and documents, was 180 points.

A male applicant who was a new graduate at the time received a score of 164, while the woman, who had failed a medical school entrance exam for three years, received zero points.

The woman was not informed about the fact until January this year when the panel released the report.

“I can't believe that many of my points were deducted,” she said, grimacing. “The time we spent on studying like hell and preparing for the exam has nothing to do with gender.”

Along with compensation, the woman demanded the university issue an apology for rigging the exams.

“We should not be discriminated against because we're women. There's no excuse. I want St. Marianna University to admit the injustice and apologize thoroughly,” she said.

In the aftermath of the series of scandals, the education ministry pointed out that 10 universities have discriminated against prospective applicants based on their gender and the years a student had spent after failing the entrance exam and studying to try again.

Though nine universities have admitted wrongdoing, St. Marianna University has not.

The panel that St. Marianna University established concluded in January that the institution had discriminated against women and those who were not a new graduate at the time of testing and had taken the entrance exam before and failed.

But the university officials refused to accept the panel's assessment.

The panel, which examined the results of entrance exams conducted between fiscal 2015 and fiscal 2018, said in its report that the university allotted each applicant in the second-round exam a combined score of his or her application forms and documents.

Among more than 90 percent of the applicants, the panel found the university allotted the same score based on categorizations, such as their gender and past failure status.

In each fiscal year, women received the same lower scores. Those who had previously failed an entrance exam more often than others were also rated lower evenly.

The allotted score for application forms and documents in fiscal 2015 was 80. Both men and women who had previously failed an entrance exam more than others received lower points.

Among them, women were scored 18 points lower than the men in the same “rank.”

The plaintiffs are also asking the university to disclose the actual scores they should have received if they were not discriminated against based on these categories.

On top of that, they are demanding that the university reveal the lowest minimum score needed to pass the second-round exam.

Depending on the university’s responses to these questions, the plaintiffs will increase the amount of compensation they are seeking.

St. Marianna University officials have claimed that they “evaluated application forms individually” and denied they discriminated against applicants based on their gender and other categories.

The university posted a statement on its website on Sept. 30 in response to the education ministry’s request for it to offer a logical explanation over the allegations over the exams, which said officials “have not confirmed the fact that the applicants’ scores were deducted evenly.”

The ministry also asked statistics experts to look into the university’s scoring. The experts reported that they “had no choice but to conclude that the difference in these scores are not based on students' abilities but artificially allotted for male and female applicants separately,” the ministry said.

On Oct. 1, the ministry concluded that the university’s past conduct involving the exams was “inappropriate.”

(This article was written by Azusa Mishima and Tomomi Abe.)