‘Demon Slayer’ movie gets rabid fans out in force for 7 a.m. start 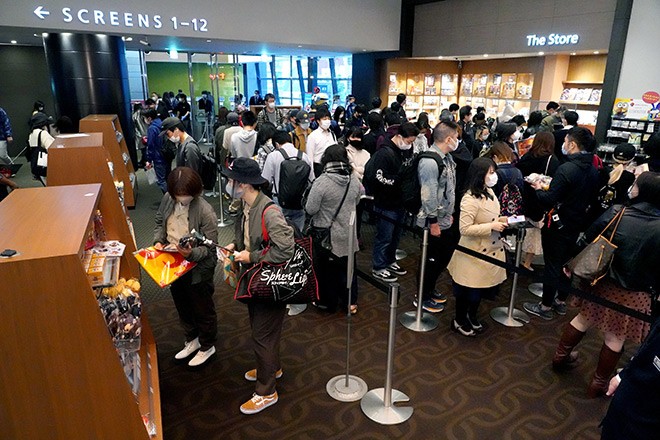 Many people line up to buy limited-edition goods at Toho Cinemas Shinjuku from the early morning on Oct. 16 on opening day for “Demon Slayer the Movie: Mugen Train.” It is scheduled to be shown 42 times at the cineplex that day. (Tsubasa Setoguchi)

Company employee Akira Sakurai got up early for the opening 7 a.m. screening on Oct. 16 of “Demon Slayer the Movie: Mugen Train,” which has been creating a huge buzz on social networking sites.

On opening day, some theaters planned to show the anime, directed by Haruo Sotozaki, up to 40 or so times. Many die-hard fans such as Sakurai, 32, came to see it from the early morning at Toho Cinemas Shinjuku.

Sakurai has been doing staggered commuting times due to the new coronavirus pandemic, allowing him to start his day at the movies.

“I can go to work with enough time even after I watch the two-hour movie,” he said. “But (honestly) I just want to see it at the earliest time.”

About 100 people gathered in front of the theater before it opened at 6 a.m. Soon after the opening, many people lined up to buy limited-edition goods inside. Theater staff restricted entry to ease the congestion and ushered patrons through the doors in turn.

Sakurai bought some of the limited-edition items before the screening.

“The anime has a classical story to describe life, death and destiny, and has a new world view, like demons, or "oni," who have various kinds of abilities and stories,” he said. “Those things fascinate me.”

The movie is scheduled to be shown 42 times on 11 screens at Toho Cinemas Shinjuku, including late-night shows.

According to a Toho Cinemas Shinjuku official, about 8,000 people are expected to pack the cineplex on Oct. 16, with most movie-goers seeing the anime.

According to reservation websites of other theaters, the movie is scheduled to be shown 39 times at Shinjuku Wald 9 and 36 times at Nakagawa Korona Cinema World in Nagoya on opening day.

People voiced their surprise on SNS for the numerous screenings, and one poster said that the screening schedule is like a “timetable for trains and buses.”

The original work of the “Demon Slayer: Kimetsu no Yaiba” is a manga by cartoonist Koyoharu Gotoge. The manga was carried in the Weekly Shonen Jump comic anthology.

The manga gained huge popularity after it was adapted to an animated TV series, and the comic book series boasts more than 100 million copies in print, including digital editions.

The movie adaption is also garnering a lot of attention. Aeon Cinema’s website started to accept ticket reservations on Oct. 13, but the site became difficult to access because of the heavy traffic.

Toho Cinemas Ltd. will sell tickets for all seats in its theaters across the nation by Oct. 18 on the condition of prohibiting audiences from consuming food during screenings as a safety precaution against the novel coronavirus.

The government relaxed restrictions on the size of audiences significantly from Sept. 19, but the company limited the number of tickets available on a voluntary basis.

It sold tickets for all the seats in some of its theaters, such as in Tokyo and Osaka, on Oct. 10 and 11, but it is the first time for Toho Cinemas to do so for all its theaters.

(This article was written by Bunna Takizawa and Yuji Harada.)