LGBT groups call for equality legislation ahead of 2020 Games 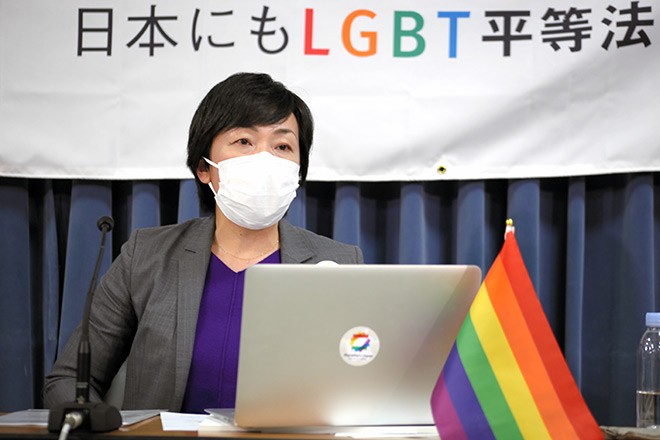 Yuri Igarashi, co-chair of the Japan Alliance for LGBT Legislation, holds a news conference in Tokyo on Oct. 15. (Provided by EqualityActJapan)

Japan’s LGBT advocacy groups have launched a signature drive calling for legislation that would ban discrimination based on a person's sexual orientation.

The groups hope that legislation could be enacted before the Tokyo Olympic and Paralympic Games scheduled for the summer of 2021 so it can be remembered as one of the lasting legacies of hosting the international sporting events.

Japan Alliance for LGBT Legislation, an organization consisting of approximately 100 groups that support the LGBT community nationwide, jointly announced on Oct. 15 with two other organizations the launch of a new international petition calling for the new law.

“I hope Japan takes responsibility as the host nation and pushes the legislation forward,” said Yuri Igarashi, a co-chair of the Japan Alliance for LGBT Legislation.

Representatives from the organization said more than 80 countries around the world have a similar law that bans discrimination based on sexual orientation.

But in Japan, only the Tokyo metropolitan government and the Ibaraki prefectural government have passed bylaws banning that kind of discrimination.

The group pointed to a survey that suggests this is a widespread problem. Forty percent of respondents who personally know someone who identifies as a sexual minority said they either witnessed or heard about a case where someone was fired or demoted at work because of their sexual orientation.

Some people have even been driven to the edge and considered suicide, the organization’s representatives said.

The organization said it shows the need for a law protecting members of the LGBT community from abuse, as well as establishing a support and counseling system.

The organization started huddling in study groups five years ago to prepare to campaign for the legislation.

They said they will aggregate the signatures they collected early next year and submit them to each political party, and urge lawmakers to produce the legislation.

The Olympic Charter prohibits discrimination based on sexual orientation.

The petition can be found at https://www.equalityactjapan.org.