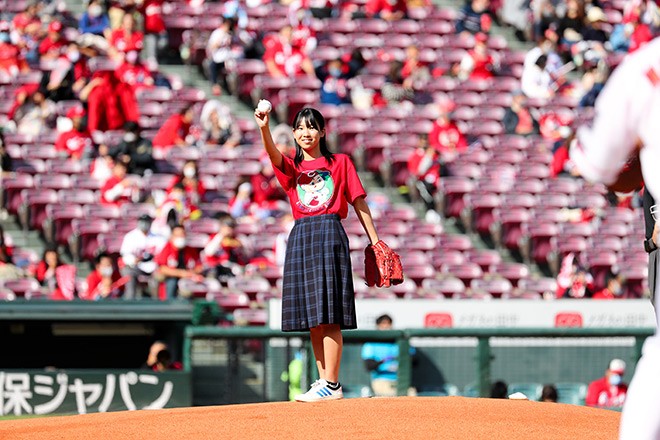 Tomomi Kakumori prepares to throw out the ceremonial first pitch on Oct. 17 at Mazda Zoom-Zoom Stadium. (Provided by the Hiroshima Carp)

But Kakumori and her classmates threw a perfect strike on the day in the battle against amyotrophic lateral sclerosis (ALS) disease.

Their Hiroshima Prefectural Mitsugi Senior High School, which has only about 200 students, is working with the local professional baseball team to spread understanding about the intractable disease.

“I was very nervous," Kakumori said after throwing out the first pitch. "I set this as one goal through a belief of wanting more people to know about ALS.”

The students became interested in ALS in 2016 when then Vice Principal Takanobu Nagaoka, 57, was diagnosed with the disease, in which nerve damage causes patients to progressively lose control of their muscles.

The student body association conducted various activities to support Nagaoka, including fund-raising drives. But the students felt something more was needed to spread public awareness of ALS.

Kakumori, the student body president, wrote a letter to the Carp franchise on behalf of her schoolmates in late 2019 asking to hold an event to raise awareness at Mazda Zoom-Zoom Stadium.

Team owner Hajime Matsuda agreed to the request because he had long felt it was important for the team to develop close ties with the local community.

Kakumori and her friends displayed panels on the stadium concourse on Oct. 17 explaining what ALS was and what treatments were available.

T-shirts and badges developed jointly by school students and the team were sold, with the proceeds being donated to a fund providing support to those suffering from intractable diseases.

Nagaoka used a motorized wheelchair to attend the Oct. 17 game. While he can no longer converse because of the weakening of his muscles, he did mouth that the vitality of the students was amazing.

Kakumori said, “When I sent the letter, I never thought this would actually come about. In the future, when I may think that I cannot do something, I want to make my best effort by remembering this day.”