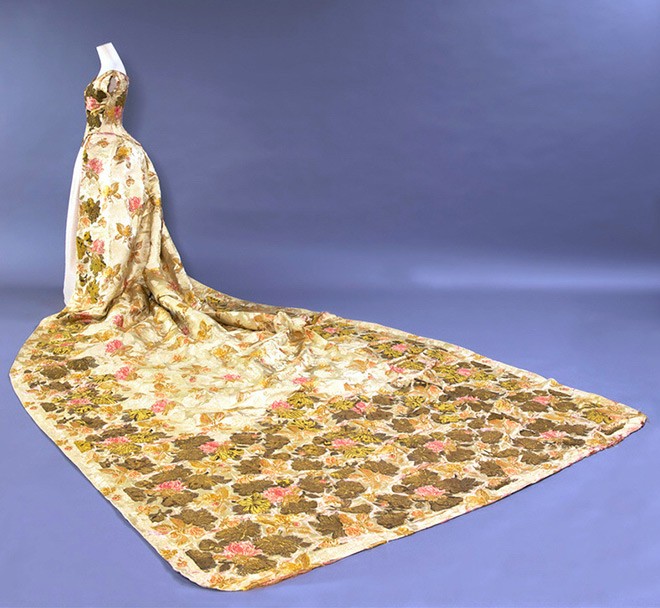 A formal court gown with a long trail thought to have been tailored overseas for Empress Shoken (1850-1914) is unraveling all sorts of secrets as it undergoes repairs.

One finding indicates that Japanese artisans were involved in embroidery for the dress, one of several worn by the consort to Emperor Meiji (1852-1912).

Although still undergoing repairs, the garment is on display through Dec. 6 at the Meiji Jingu Museum of Meiji Shrine in Tokyo as part of an exhibition commemorating the centenary of the shrine’s establishment.

The flowing dress was preserved at Daishoji, an imperial convent in Kyoto, where female members of the imperial clan, court nobility and others lived as Buddhist nuns after they retired.

A note in Indian ink found on the lining of the dress says the garment was donated by Empress Shoken to the nunnery in 1911.

Ryobun Inui, a nun at Daishoji, said its abbess at the time had interactions with Empress Shoken.

The gown has been on public display on occasion, but it began showing signs of serious wear and tear, prompting repairs that started in 2018.

Monica Bethe, head of the executive committee of the scientific repair and restoration project, said the style of the sleeves and other features indicate the garment was tailored around 1888-1890.

While records suggest the gown was tailored in Germany, Bethe said it was found during repairs that embroidery was made in Japan.

When the lining of the dress was removed, a piece of traditional Japanese “washi” paper, with kanji written on it, emerged on the other side of embroidery on the dress’s train that served as a stiffener.

“Repairs of the dress help us understand the historical background of the time the dress was being made,” said Bethe, director of the Kyoto-based Medieval Japanese Studies Institute. “The work involves unraveling one mystery after another.”

She referred to a “mystery” surrounding the fabric of the dress.

The fabric was assumed to be a product of Japan, partly because Empress Shoken was a keen promoter of the nation’s silk industry.

Given its complexity, the dress’s fabric was likely woven using a Jacquard machine. However, experts concluded that it would have been difficult to weave it with the less sophisticated Jacquard machines then in use in Japan.

Empress Emerita Michiko has expressed interest in the repair project from the viewpoint of preserving culture, an official said.

Textile researchers from the United States, Britain and elsewhere have also shown interest in the dress, and the repair work has drawn on insights they provided, Bethe added.

The Meiji Jingu Intercultural Research Institute serves as one of the project’s institutional cooperators.

The repair work is being done by Sengiren, a Kyoto studio that has worked on repairs of many government-designated important cultural properties, including kimono from the Momoyama Period (late 16th century).

Restorers at Sengiren are paying close attention because reinforcing a displaced embroidery thread can prompt another to come loose.

“Our mission is about passing down the dress for the next generation without letting it deteriorate from its current state, including stains and other flaws,” said Toshiaki Yano, president of Sengiren.