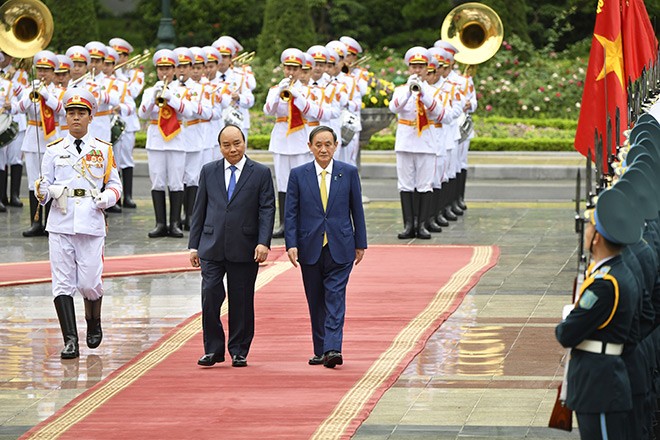 Prime Minister Yoshihide Suga on Oct. 18 kicked off a four-day trip to Vietnam and Indonesia, his first overseas tour, to bolster ties with ASEAN nations to counter an increasingly assertive China.

His visits are aimed at maintaining and developing Japan’s presence and influence in a region where China is exerting growing maritime and economic clout.

In a meeting in Hanoi on Oct. 19, Suga and his Vietnamese counterpart, Nguyen Xuan Phuc, reached an agreement in principle that would allow Japan to export its defense equipment and technology to Vietnam.

Vietnam is leading ASEAN's Indo-Pacific vision, which features many issues covered by FOIP, and Suga told Phuc that Japan will support this program.

“The ASEAN nations are extremely important partners (for Japan) to realize a ‘Free and Open Indo-Pacific (FOIP),’” Suga told reporters on Oct. 18 before departing from Tokyo's Haneda Airport.

“I want to demonstrate Japan's determination to contribute to the region’s peace and prosperity, both at home and abroad,” he said.

Japan also plans to start allowing short-term business travelers from Vietnam to enter the nation under certain condition and also resume regular flights with the country that were suspended due to the novel coronavirus pandemic.

FOIP, which was announced in 2016 by Suga's predecessor, Shinzo Abe, is aimed at expanding Japan’s cooperation with countries that share common values, such as the rule of law and freedom of navigation, to keep China in check.

Suga's tour of two key ASEAN nations signals that his administration will continue to pursue the FOIP initiative. ASEAN member nations are the hub that connects the Indian Ocean and the Pacific Ocean.

A Foreign Ministry official said it will be “impossible to implement FOIP without the cooperation of ASEAN.”

“The ASEAN nations will take more actions toward China that are in line with Japan’s viewpoint,” said a Japanese government official.

Suga’s choice of first foreign capitals to visit since he took over from Abe speaks volumes about the policy, as Vietnam is locked in a conflict over sovereignty of the South China Sea and Indonesia has voiced increasing alarm about China's actions and intentions.

Vietnam currently serves as chair of ASEAN. Indonesia, with its 270-million-strong population, the world's fourth-largest, is also a big player in the region.

In 2013, Abe chose the two countries as destinations for his first overseas trip after he became prime minister for a second time.

Suga is expected to hold talks with Indonesian President Joko Widodo in Jakarta on Oct. 20 and return to Japan the following day.

(This article was written by Ryutaro Abe and Tomoyuki Izawa.)