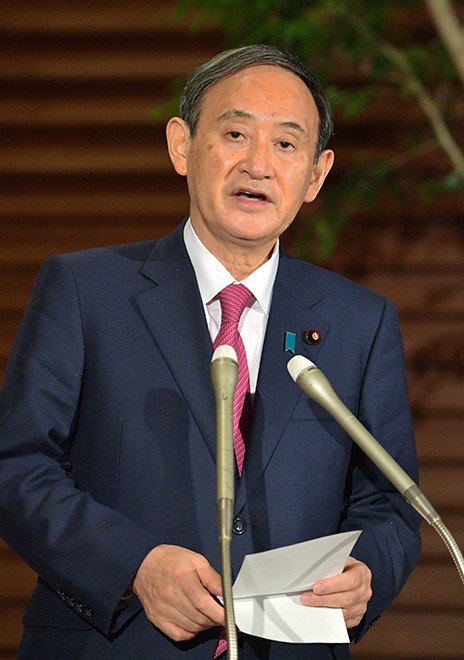 Prime Minister Yoshihide Suga talks to reporters at the prime minister’s office on Oct. 16 after a meeting with Takaaki Kajita, president of the Science Council of Japan. (Kotaro Ebara)

Sixty-three percent of voters believe Prime Minister Yoshihide Suga has given an “insufficient” explanation on why six scholars were rejected for membership on the Science Council of Japan, an Asahi Shimbun survey showed.

The controversy over Suga’s decision on membership to the council has apparently hit his Cabinet’s approval rate, which plunged to 53 percent from 65 percent in the previous survey in September, when his administration was formed, according to the telephone survey conducted on Oct. 17 and 18.

The disapproval rating for the Cabinet increased from 13 percent to 22 percent in the latest survey.

Academics and other protesters suspect that Suga rejected the six council-recommended scholars because of their previous opposition to government policies.

Suga has denied that was the case. He said he did not want to simply “follow precedent” and took into consideration the “larger picture.”

Respondents were also given three choices on their preferences for the pandemic-delayed Tokyo Olympics and Paralympics.

Forty-one percent hope to “have them next summer,” a jump from 33 percent in the July survey, while 26 percent want the events “postponed again” and 28 percent prefer they be “canceled.”

Fifty-five percent of male respondents approved the Cabinet, down from 62 percent in the previous survey. Among female respondents, the approval rate was 51 percent, a sharp drop from 68 percent.

Sixty percent of respondents in their 40s or younger approved the Cabinet, but the rate among those in their 60s fell to 46 percent from 64 percent in the previous survey.

Support for the Suga Cabinet appeared to follow the trend of the predecessor Shinzo Abe administration, with approval stronger among younger generations but weaker among female voters.

The most chosen reason for approving the Suga Cabinet was “it seems better than the alternatives,” cited by 43 percent.

That was followed by 23 percent who approved the Cabinet because of its policies, and 17 percent who cited the fact that the Cabinet consists largely of Liberal Democratic Party members.

Fifteen percent approved the Cabinet because “the prime minister is Yoshihide Suga,” down from 23 percent in the previous survey.

A total of 1,458 people gave valid responses to the survey.

Respondents were contacted through home phone or mobile numbers selected at random by a computer.

Of the 1,085 households with eligible voters contacted via landlines, 571, or 53 percent, responded.