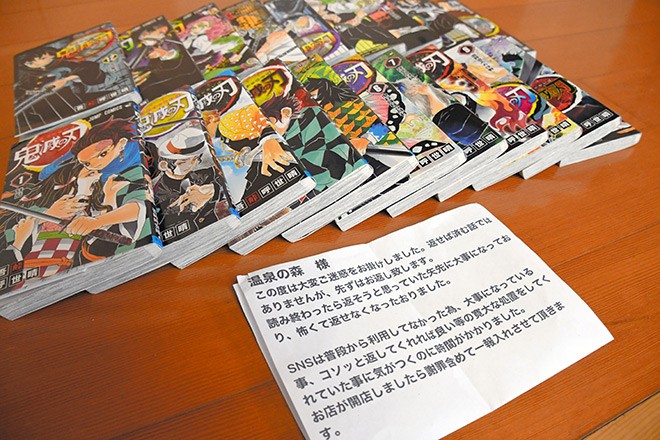 YAMAGUCHI--The theft of the popular manga series “Demon Slayer: Kimetsu no Yaiba” from a hot spring spa ended happily with the books returned tenfold, thanks to the goodwill of strangers and a repentant thief.

The "just-like-in-the-movies" story of generosity and redemption started on Sept. 25, when Takeo Umebayashi, 34, sent a tweet that tugged on people’s heartstrings.

Umebayashi, a director at Onsen no Mori, a hot spring spa facility in the Yuda Onsen district of the capital of Yamaguchi Prefecture, noticed something wrong with a rest space: volumes one through 20 of its "Demon Slayer" comic books were missing from the room.

But Umebayashi decided not to report the possible theft to police. Instead, he posted a message on Twitter that started, “Heavy news.”

“'Kimetsu no Yaiba' from volume one to volume 20 was stolen. We put our best efforts into building a collection,” he tweeted from the facility’s official account.

“If you took them home by mistake, can you please discreetly return them?” he begged in the post and included a picture showing an empty bookcase shelf.

He then quoted a line from the manga series: “If one of us is about to go off the rails, all of us must stop the person from doing so. Shall we?”

The tweet immediately went viral, and the incident was picked up by the news media.

Comic book donations flooded in from around the country, including Tokyo, Osaka, Kagoshima and Shimane prefectures. Before long, the facility had received 213 "Demon Slayer" books--more than enough to fill the bookcase.

“I was really surprised by the fact that so many strangers sent us books,” he said. “Each book is full of emotion. I felt so much appreciation and inspiration. Too many instances to mention here.”

Ko Ueda, 31, a company employee in Tokyo, is one of the donors.

He packed up the series from volumes one through 21 for donation from his own collection, and purchased the latest volume the day it went on sale in October and sent it to the spa facility as well.

“(The manga) provides real value only in being read by many people,” Ueda said. “Businesses in the tourism sector are struggling in the pandemic and I wanted to offer my help, if only a little.”

Another small miracle occurred on Oct. 12.

The spa facility received a phone call from a person claiming to be the one who took the comic books.

“I will return them tomorrow,” the caller said in a tearful voice.

The following day, the facility received a box containing a letter and all 20 missing books.

The letter began with an apology, and then explained that the person had intended to return the manga after reading them.

It also apologized for taking so long before discovering Umebayashi’s tweet and his kind words, since the person rarely uses social media.

“I think the person returned the books with courage,” Umebayashi said. “Hearing the person’s words of apology fulfilled my wish.”

Umebayashi said the facility will make the donated comic books available in its rest space. Each book will carry a sticker displaying the donor’s name.

Since the stolen books have been returned, Umebayashi said if donors wish, their donated books can either be returned or donated to a school or other worthy facility.