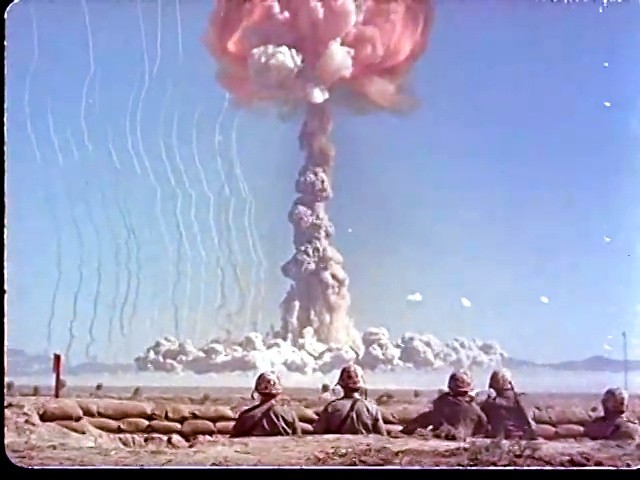 Paris-based filmmaker Kenichi Watanabe completed a documentary on nuclear radiation in time for the 10th anniversary of the Fukushima nuclear plant accident in March.

It is told from the perspective of radiation victims.

“Focusing on radioactivity, I want to reconstruct the idea that ‘nuclear energy and atomic weapons are inseparable,’” Watanabe, 69, said.

The film is set for theatrical release in spring 2021. It made its broadcast debut this summer in Europe and was shown at select venues across Japan in October.

The documentary features interviews with an ex-soldier who observed a nuclear test during the Cold War in the U.S. Nevada desert, and a former fishing boat crew member from Kochi Prefecture who was exposed to fallout when the United States conducted a nuclear test at Bikini Atoll in the Pacific.

It also includes interviews with soldiers allegedly exposed to radiation during Operation Tomodachi, a disaster relief effort conducted off the coast of the Tohoku region by the U.S. armed forces after the accident at the Fukushima No. 1 nuclear power plant, and a person who underwent thyroid surgery after that nuclear disaster.

The title is a reference to “Our Friend the Atom,” a Disney film produced to promote the benefits of atomic power in the 1950s during the administration of President Dwight D. Eisenhower, who called for the “peaceful use of atomic energy.”

At the time, an anti-nuclear movement was gaining momentum in Japan after the tuna fishing boat Daigo Fukuryu Maru and other vessels were contaminated by fallout from the U.S. thermonuclear weapon test at Bikini Atoll in 1954. The Diet, meanwhile, passed the country’s first-ever budget proposal for nuclear energy.

“It was imperative for Japan, which suffered atomic bombings in Hiroshima and Nagasaki and whose Constitution contains the war-renouncing Article 9, to come up with an ‘atomic dualism’ to introduce nuclear energy, saying that ‘its peaceful use is good and military use is bad,’” Watanabe said.

Watanabe was born in 1951. He started his career working at Iwanami Productions Inc. in Japan before moving to Paris to produce documentaries for European TV companies.