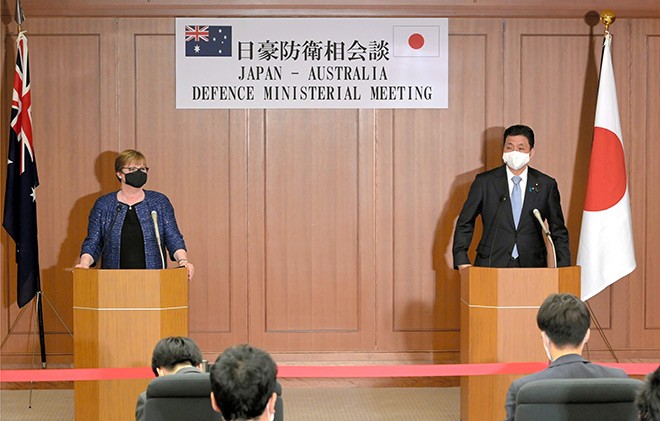 The move to further strengthen the countries' bilateral defense collaboration was made during a meeting of the ministers at the Defense Ministry's building in Tokyo.

“We should strengthen the interoperability between the SDF and Australian forces and make it the basis for bilateral cooperation under normal circumstances,” Kishi told reporters after the meeting. “I want to further develop defense cooperation with Australia.”

Self-Defense Forces (SDF) personnel are permitted to protect weapons and other equipment of units of the U.S. armed forces and armed forces of other foreign countries under a provision in the SDF Law.

New security legislation passed by the Diet that took effect in 2016 expanded the provision’s targets to cover foreign forces.

After receiving an advance request for protection, the defense minister would decide whether to fulfill the request.

The provision allows the SDF to use weapons when the target is under an imminent threat.

The SDF has conducted such protection operations on numerous occasions including joint drills with U.S. forces--twice in 2017, 16 times in 2018 and 14 times in 2019.

By applying the provision to Australian forces, Japan, as well as strengthening bilateral ties, appears to be looking for backup to keep China in check.

The defense ministers confirmed at the meeting that Japan and Australia will cooperate on bilateral security in the Indo-Pacific region in light of advances by China in the East China Sea and South China Sea.