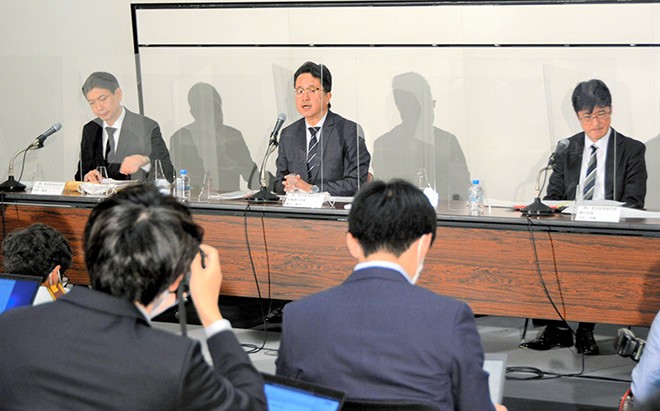 Ryusuke Yokoyama, center, a senior executive officer at the Tokyo Stock Exchange, and other officials hold a news conference on Oc. 19. (Shinji Hakotani)

The Financial Services Agency will investigate the Tokyo Stock Exchange’s management structure over a malfunction that halted trading for a full day and damaged Japan’s aspirations to become an international finance center, sources said.

The sources said FSA officials will search the TSE’s offices and also judge the effectiveness of the measures it plans to implement to prevent a recurrence. An order to improve operations is expected soon, the sources said.

FSA officials are taking the matter seriously because the trading suspension for all of Oct. 1 has thrown cold water on the Suga administration’s plans to turn Tokyo into an international financial hub.

At a news conference on Oct. 19, TSE officials explained that a number of problems caused the full-day trading suspension.

One big problem was the incorrect setting of a function in the TSE’s computer system that is supposed to switch to a backup whenever a mechanical failure occurs, they said.

They also cited a number of errors in the operating manual.

In addition, the absence of rules on resuming trading after a mechanical failure was a major reason why the bourse remained closed all day.

TSE officials said they plan to set up a deliberative committee, including officials of securities companies, investors, computer companies and the FSA, to establish such rules by the end of March 2021.

Fujitsu Ltd. officials also held a news conference on Oct. 19 and apologized for a discrepancy in the operating manual as well as for specifications set for the equipment that malfunctioned.

Although the equipment that failed was manufactured on commission by another company, Fujitsu officials said they are taking responsibility for the quality of the equipment because it was sold under the Fujitsu brand name.

The operating manual stated that the equipment would switch automatically to a backup system whenever a malfunction occurred, but the setting had not been changed to allow for such a switch.

Fujitsu officials admitted they failed to not only revise the operating manual but also did not test or confirm the setting before handing the equipment over to the TSE.

At the Oct. 19 news conference, Ryusuke Yokoyama, a senior executive officer at the TSE, explained that the equipment that failed did not have its setting changed from the time of delivery to allow for automatic switching to a backup device within 30 seconds of a mechanical failure.

According to Yokoyama, Fujitsu did not conduct tests on the equipment, and TSE officials also did not adequately confirm the setting when they received the equipment.

The Arrowhead computer system began operating in 2010, and new versions were installed in 2015 and 2019.

For the 2015 version, the setting should have been changed, but the TSE kept the same setting as for the original version.

TSE officials never realized the error in the equipment setting because no malfunction had occurred until now. That meant that a malfunction could have caused a similar suspension of trading anytime after 2015.

To prevent a recurrence, the TSE replaced the defective equipment and changed the setting.

The exchange will also inspect its entire computer system and strengthen automatic switching tests for its equipment.

TSE officials said another reason trading could not be resumed earlier was that trading orders from securities companies continued even after the malfunction was detected.

They said they will improve the computer system so that it stops accepting such orders should another glitch occur.

Yokoyama said a reason no rules were set to stop those trades was because the TSE had stressed the slogan of “never stop.”

He said the exchange plans to also emphasize “resilience” for its computer system.

(This article was written by Takufumi Yoshida and Yasuro Suzuki.)