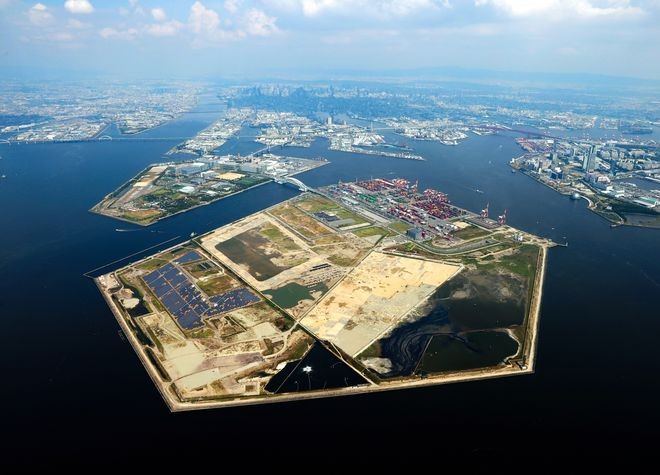 The Yumeshima district in Osaka's Konohana Ward is a planned site for an integrated resort project, which includes a casino. (Asahi Shimbun file photo)

The government is extending by nine months its July 2021 deadline for local governments to submit bids to host “integrated resorts” (IR) that feature casinos as their main attraction.

The postponement, announced in consideration of inevitable procedural delays due to the COVID-19 pandemic, is explained in the government’s draft of “basic IR policy guidelines” where rules are laid out for the selection of IR host cities, casino operators and other matters.

Delays are now quite likely in the projected start of IR businesses in the mid-2020s.

Although the circumstances have changed since the IR program was conceived, the government is still aggressively promoting it.

This is beyond comprehension.

The previous administration of Prime Minister Shinzo Abe positioned the IR program as the centerpiece of its economic stimulus strategy, expecting to lure free-spending tourists from abroad to casinos.

But the pandemic has vastly reduced the traffic of people across national borders. Casino operations have been suspended in the United States and Europe, and business is unlikely to recover any time soon.

One of the biggest questions is whether overseas casino operators will ever regain their interest in investing in Japan.

Prime Minister Yoshihide Suga was the deputy chief of the Abe administration’s IR promotion headquarters in which all Cabinet members were involved.

A committed promoter of the government’s tourism policy, Suga boasted, at his inaugural news conference as prime minister, that he himself was responsible for the influx of foreign visitors to Japan.

But the situation has since changed drastically. Confronted with the vulnerability of policies that rely on foreign visitors, the tourist industry has begun to explore new and more viable business prospects, even while hoping for foreign visitors to return.

The government must face this reality squarely, reconsider its tourism promotion policy and stop being obsessed with casinos.

It is also time for local governments that have been hoping to host casinos to stop and think about policies that will be welcomed by local citizens and open new doors to a brighter future.

The basic IR guidelines were initially supposed to have been finalized in January. But this was derailed when Tsukasa Akimoto, a Lower House legislator, was arrested and indicted for alleged bribery in a casino deal.

As a result, a proposal submitted in autumn last year was modified and finally disclosed two weeks ago.

Given the Akimoto scandal, the draft guidelines require national and local government employees to keep records of their exchanges with casino operators.

As for the pending issue of how to address gambling addiction, a clause was added to the proposed guidelines saying to the effect that casino operators and local governments “must do everything in their power.”

However, exactly what that entails is being left to the discretion of the parties directly involved.

But with the cooperation of Nippon Ishin (Japan Innovation Party), the Abe administration forcibly passed casino-related legislation twice--in December 2016 and July 2018--after only cursory deliberations.

The first Diet session under the Suga administration will be called shortly. With issues left unresolved from the Abe era, as well as new controversies that have emerged, there is a mountain of casino-related problems that must be discussed.

We can only hope the ruling and opposition camps will engage in fruitful deliberations.