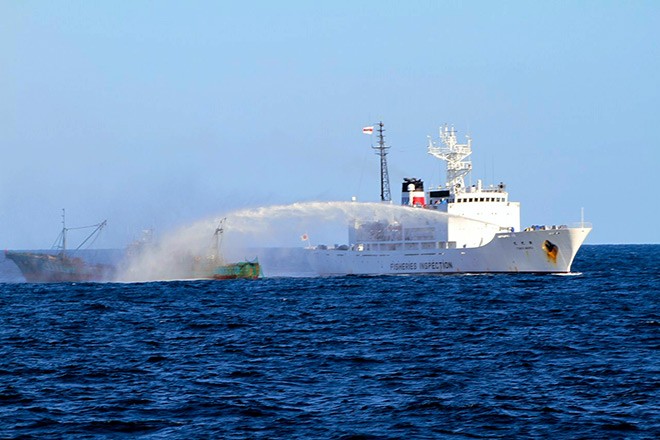 The Fisheries Agency moved to secure the safety of Japanese fishing boats operating in the rich Yamatotai fishing grounds within the nation’s exclusive economic zone by requesting they avoid certain areas and go elsewhere due to a recent surge in Chinese vessels moving in.

The request, directed at Japanese fisheries cooperatives, caused considerable grumbling with a fisherman in Ishikawa Prefecture, facing the Sea of Japan, griping, “When a burglar has entered one’s backyard, would anyone say do not get near the thief?”

Fisheries Agency officials declined to go into details, saying only that its request was aimed at securing the safety of Japanese fishing boats.

The Yamatotai fishing grounds, located in the center of the Sea of Japan and considered a treasure trove of "surumeika" Japanese flying squid and crab hauls, was where a collision occurred in October 2019 between a Fisheries Agency patrol boat and a North Korean vessel that led to the sinking of the latter.

According to Fisheries Agency officials, about 4,000 North Korean fishing boats were ordered to leave the waters in 2019. But this year, only one boat has been asked to do so.

However, Chinese fishing boats have taken up the slack and by the end of September a total of 2,589 boats were asked to leave the EEZ, a 3.6-fold increase over the same period in 2019.

The Japan Coast Guard, which operates under different laws, noted that in any given year more than 1,000 North Korean fishing boats are normally ordered to leave but said no such action had been taken this year.

Satoru Miyamoto, a professor of North Korean politics and diplomacy at Seigakuin University, said the novel coronavirus pandemic was likely behind the sharp decrease in North Korean fishing boats operating in Japanese waters.

“Local media reports indicate that even items that wash ashore on the coast carry a risk of infection, so I believe restrictions have been implemented on fishing,” Miyamoto said. “With North Korean competition out of the picture, Chinese fishing boats may have increased because of expectations of higher catches.”

That, of course, has had a major impact on Japanese fishing operations.

“We had hopes for making up for last year’s record bad catch (of squid),” said an official with the Ishikawa prefectural fisheries cooperative. “China does not have a coast along the Sea of Japan, so why are its fishing boats operating in Japan’s EEZ?”

The Fisheries Agency issued its request on Sept. 30 asking Japanese squid fishing boats to refrain from entering the western area of the Yamatotai fishing grounds.

A similar request was issued last year after a Japan Coast Guard cutter had firearms aimed at it by a small boat displaying the flag of the North Korean Navy. The Fisheries Agency subsequently issued the request to refrain from entering nearby waters.

“Something might have occurred this year that went beyond the ability of the Fisheries Agency to handle,” said an Ishikawa fisheries cooperative official. “Our frustration would abate if they just told us what kind of danger exists.”

Hiroshi Kishi, president of JF Zengyoren, the national federation of fisheries cooperatives, made a round of visits to government offices on Oct. 16, including the prime minister’s office, to request that fishing be allowed to resume in the Yamatotai zone.

“The Japanese government should implement a firm response so that Japanese boats can resume fishing,” Kishi said.

“(The request to not enter waters) is a haphazard response,” said Yoshihiko Yamada, a professor of maritime policy at Tokai University. “If a problem has arisen that exceeds the ability of the Fisheries Agency to handle, the government ought to make an integrated response, including resorting to diplomatic channels.”

(This article was written by Noriyuki Kaneta and Shun Niekawa.)