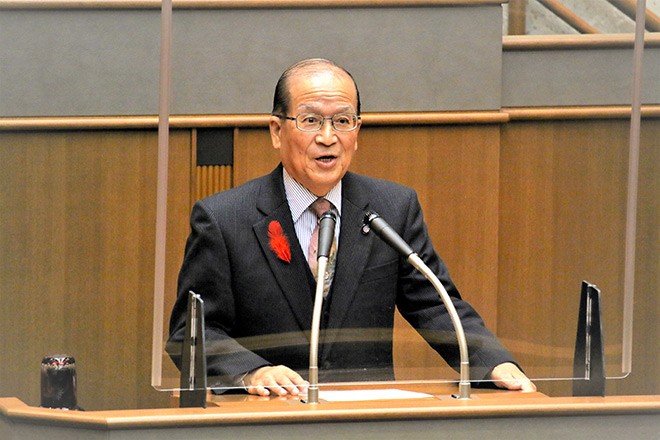 Masateru Shiraishi, an assembly member of Tokyo's Adachi Ward, speaks at an Oct. 20 session about his homophobic remarks. (Ryo Oyama)

An assemblyman in Tokyo’s Adachi Ward retracted his homophobic remarks and issued an “apology” that fell flat among those most offended by his comments.

“There was an expression in my previous remarks that can be regarded as discriminatory as an assembly member,” said Masateru Shiraishi, 79, a Liberal Democratic Party member, during an Oct. 20 assembly session.

“I apologize to people who felt discomfort and whose feelings I hurt,” he said, reading from a prepared text. “There was an inappropriate expression that forced my values (on others).”

Shiraishi has come under fire from around the nation since he gave his opinions about Japan’s low birthrate and aging society at a Sept. 25 assembly session.

He emphasized the importance of teaching children to “have a normal marriage” and “bring babies into the world and raise children like normal” human beings.

“Once L (lesbians) and G (gays) prevail in Adachi Ward and they become protected by law, Adachi Ward will be sent to its doom,” he said. “Think about this. If all Japanese women are L and all Japanese men are G, who can produce children? Not one child would be born to carry on the next generations.”

Shiraishi’s retraction and apology were expected at the Oct. 20 session, and the gallery was filled with residents. Only 43 seats--about half of the regular seating--were available to maintain a safe distance between people and prevent the spread of novel coronavirus infections.

Many people who did not win a seat in a lottery watched a livestream of the session in the ward office’s lobby on the ground floor.

One viewer, Chieko Nishiyama, an adjunct lecturer who co-chairs a group of sexual minorities and their supporters in the ward, was unhappy about Shiraishi’s use of “an expression that can be regarded as discriminatory.”

“He didn’t admit that what he said was discriminatory,” Nishiyama said. “It was such an evasive way to apologize. I’m so disappointed by his empty apology.”

Shiraishi had earlier told The Asahi Shimbun that he would not apologize because he felt there was nothing wrong with what he had said. He later relented after pressure from the assembly chairman.

A 48-year-old bisexual resident also did not buy Shiraishi’s apology, saying, “To me, it didn’t look like he was speaking his own words.”

Still, the resident noted that Shiraishi said he “wants to make an effort to accept sexual diversity.”

“If we get an opportunity to talk with Shiraishi, I want him to listen to our voices,” the resident said.

The resident and others are expected to urge the ward office and the assembly to adopt an ordinance to recognize same-sex partnerships and improve living conditions for sexual minorities.

“This is not over yet,” the resident said.

At the session, assembly members of opposition parties submitted a motion to censure Shiraishi for his offensive remarks, but it was rejected after failing to win a majority vote.

After reading his statement, Shiraishi left the session early because he did not feel well, according to the assembly secretariat.

Adachi Ward Mayor Yayoi Kondo said the government office has received criticism and opinions from many residents about Shiraishi’s comments.

“I want to set up a consultation services desk as soon as possible,” Kondo said. “I will listen to the voices of (sexual minorities) and closely examine and work on an ordinance to protect and recognize same-sex partnerships among other issues.”

According to the LDP’s Adachi Ward assembly chapter, Shiraishi has told them he would resign as chairman of its health and welfare committee.

“I think (Shiraishi) took responsibility by apologizing and retracting his remarks,” said Tadashi Kaneda, the chapter’s secretary-general. “We as a party will also think about having a study group or something.”

Akira Shikahama, the assembly’s chairman, issued a statement in light of the outrage that erupted over Shiraishi’s remarks.

“Each assembly member will further deepen our understanding of diversity in order to prevent a similar incident from happening ever again,” the statement said. “The assembly as a whole will work toward realizing a ward administration that respects human rights without discrimination.”

Koichiro Hoshi, a 55-year-old resident of Nishi-Tokyo who is gay and won a seat in the gallery, said he believes many people are prejudiced against sexual minorities but will not say what they think, like Shiraishi did.

“I will keep working so that those people will understand (the issue), too,” Hoshi said.