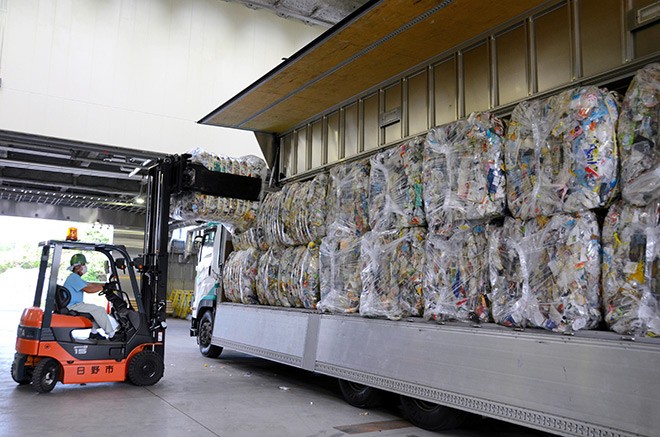 Waste plastics are loaded onto the bed of a truck in Hino, western Tokyo, to be transported to a recycling facility. (Mutsumi Mitobe)

The government is working on plans to spur companies to recycle their plastic waste and kick their bad trash habits to the wayside.

Measures are being drafted that could be in place as early as April 2022 to entice companies that produce and sell plastic products into taking more responsibility for collecting and recycling the waste.

This might involve companies having to install large waste generators for recycling.

Voluntary collection of plastic waste in Japan has mostly taken place on a small scale, such as collecting food trays at supermarkets.

The Environment Ministry and the industry ministry presented draft policy proposals to their joint advisory panel of experts on Oct. 20 to significantly bolster plastic recycling.

Under the proposal, the government plans to require businesses that produce huge amounts of plastic waste at their factories or construction sites to recycle it to encourage companies to reprocess the plastic garbage generated from their manufacturing processes.

It also plans to help enable companies to collect and recycle used plastic items they have produced, as well as those manufactured by other firms. The government would provide support for companies that award consumers points for cooperating with voluntary waste collection or take other measures to collect more garbage.

The government will also draw up guidelines on measures that companies should take when they design and commercialize their products.

The measures include reducing the amount of plastics used in products, replacing plastics with alternative materials, and opting to use materials that can be easily recycled. The guidelines are aimed at urging industries to standardize product designs and make them more environmentally friendly.

The ministries will wrap up their discussions by the end of this fiscal year to submit a bill to next year’s ordinary Diet session. They aim to introduce the new plastic recycling policy measures in fiscal 2022 or later.

The government set a goal to reduce the amount of disposable plastic waste by 25 percent by 2030. In July, it began requiring retail stores and other businesses to charge consumers for plastic bags as a measure to cut back on plastic garbage.