EDITORIAL: Government’s energy blueprint needs to return to drawing board 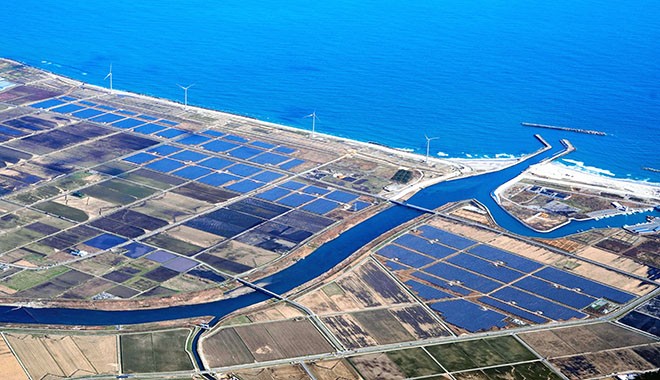 Large solar power generation facilities are installed along the coast of Minami-Soma, Fukushima Prefecture, which was devastated by the tsunami generated by the 2011 Great East Japan Earthquake. (Asahi Shimbun file photo)

The Ministry of Economy, Trade and Industry has started discussions on the government’s new Basic Energy Plan.

The government should radically recast the overarching vision for Japan’s energy future without being bound by the current plan.

It should seek answers to key questions, such as how much of energy supply should be covered by renewable sources and how to reduce the nation’s dependence on coal and nuclear power.

The energy supply picture has changed drastically over the past several years. But the current Basic Energy Plan, formulated in 2018, is based on the targets concerning power sources set by the METI in 2015. As a result, the blueprint runs counter to the domestic reality and the international trend.

While the current plan cast renewable energy as a “main power source” for the first time, it maintains the target share unchanged at a modest 22 to 24 percent of overall power output in fiscal 2030.

The plan also calls for nuclear power to account for 20 to 22 percent by restarting offline reactors as their safety is confirmed.

But the reality tells a different story.

The amount of electricity generated by renewable sources during the first half of this year grew 20 percent from a year earlier, according to preliminary data about domestic power output by source compiled by the International Energy Agency.

The share of renewable energy rose to 23 percent, hitting the government’s fiscal 2030 target, due partly to a decline in overall power output, which reflects slow economic activities due to the novel coronavirus pandemic. Nuclear power accounted for only 6 percent amid persistent safety concerns.

A global shift from carbon-based energy keeps accelerating. More than 120 countries and regions have already supported the goal of achieving net zero carbon dioxide emissions by 2050.

The government submitted the greenhouse gas emissions target to the United Nations this spring. It called for reducing Japan’s gas emissions by 26 percent from fiscal 2013 levels by fiscal 2030, unchanged from the target set five years ago. This lukewarm stance drew international criticism.

Prime Minister Yoshihide Suga is expected to pledge Japan’s commitment to a net zero greenhouse gas emission goal in 2050 in his first policy speech at the Diet, to be delivered next week.

But the new goal should be underpinned by specific policy proposals in the new Basic Energy Plan.

The METI is arguing for the need of nuclear power generation as a means to realize a low-carbon future. But efforts to bring offline nuclear reactors back on stream have made no headway due partly to strong public opposition.

Responsible policymakers would try to map out a plan to reduce Japan’s dependence on atomic energy and phase out nuclear power generation over the long term.

To build a society that is not dependent on either coal or nuclear power, it is vital to ensure a stable power supply from renewable energy sources, which are susceptible to weather conditions, so that green energy can provide the lion’s share of Japan’s power output.

This requires efforts for more efficient use of power transmission networks and innovations in technology to store electricity, such as storage batteries.

The markets for power and gas have been increasingly liberalized. To ensure a stable energy supply under the changing circumstances, the new Basic Energy Plan should offer a grand vision for the nation's energy future and present a road map to achieve it.