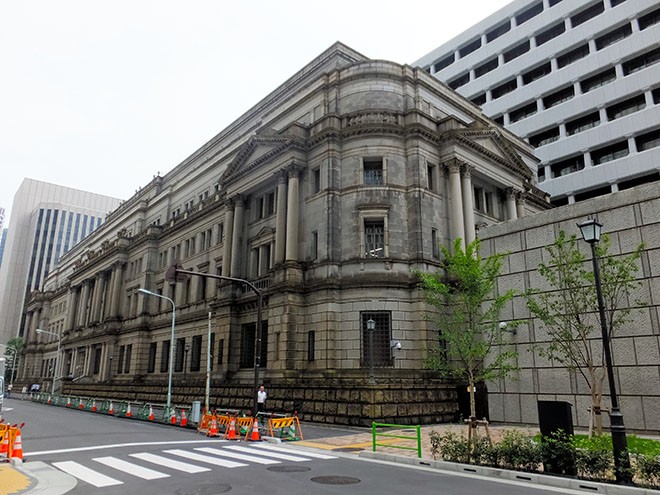 Two government entities have increased their stock investments using public money and are now indirect major shareholders in about 84 percent of companies listed on the Tokyo Stock Exchange’s First Section, The Asahi Shimbun has learned.

The combined holdings of the Government Pension Investment Fund (GPIF) and the Bank of Japan are worth about 67 trillion yen ($640 billion), representing 12 percent of the total market capitalization of the TSE.

The GPIF manages government pension plans and invests the public funds into the stock market through investment banks and asset management companies. Overseas entities in charge of pension funds also buy shares in their respective domestic stock markets to expand their funds.

However, the Bank of Japan, unlike other central banks, has also invested heavily in the domestic stock market through purchases of financial assets called exchange-traded funds (ETF).

Concerns have been raised that the artificial propping of the TSE, particularly by the BOJ, has loosened management discipline among company executives because stock prices are no longer closely linked to actual business operations.

“With public money supporting stock prices, corporate performance is not being reflected in share prices, so there has been a weakening of oversight of company management,” Nobuo Tomoda, an executive with credit research firm Tokyo Shoko Research Ltd., said.

The Asahi Shimbun conducted the study of the holdings of the two entities as of the end of March 2020 with the cooperation of Tokyo Shoko Research and Shingo Ide, chief financial engineer in the Financial Research Department at NLI Research Institute.

Both the GPIF and the BOJ bought financial assets that are linked to various stock indexes, such as the Nikkei 225 index and the broader Topix index.

Those indexes contain various company stocks, so the GPIF and the central bank are effectively indirect owners of company shares even though they may not be named as major shareholders in the financial records of the companies.

The Asahi study calculated the ratio of shares indirectly owned by the two entities of various companies listed on the TSE.

The names of major shareholders with at least a 5-percent stake must be reported on such financial records. Based on that definition, the GPIF and the BOJ were major shareholders in about 1,830 of the 2,166 companies listed on the TSE’s First Section.

The two entities had a combined stake greater than 10 percent in about 630 of the companies. Their largest combined stake, at 29 percent, was held in semiconductor manufacturer Advantest Corp.

They also hold a combined share of 22.1 percent in Fast Retailing Co., the parent company of the Uniqlo casual clothing chain operator, as well as 14.1 percent in the nation’s leading financial group, Mitsubishi UFJ Financial Group Inc. and 10.4 percent in Toyota Motor Corp.

GPIF’s stock holdings totaled about 36 trillion yen, while the BOJ had total holdings of about 31 trillion yen.

According to a similar study using data as of the end of March 2016, the two entities at that time had at least a 5-percent stake in about 980 companies, so the figure has about doubled in four years.

The value of their holdings has also risen, from about 8 percent of the total market capitalization of the TSE to 12 percent in the latest study.

The BOJ began buying ETF in December 2010, but the purchases skyrocketed after Shinzo Abe began his second stint as prime minister two years later. A major component of his Abenomics package of economic measures was an unconventional monetary-easing policy that included large purchases of ETF.

The decision on ETF purchases coincides with the naming of Haruhiko Kuroda as BOJ governor in March 2013.

When the economy stalled after the consumption tax rate was raised from 5 to 8 percent in April 2014, the BOJ in October that year tripled its annual ETF purchases to 3 trillion yen to stimulate the economy.

The GPIF also began expanding its domestic stock holdings in 2014, increasing the ratio of such shares from 12 percent to 25 percent.

The GPIF appears to have been looking for the best stocks to increase its pension fund.

But the BOJ’s purchases have more often than not been a monetary measure to prop up the markets.

When stock prices plummeted in March with the spread of the novel coronavirus pandemic, the central bank decided to increase ETF purchases to up to 12 trillion yen a year.

Despite the large ETF amount, the BOJ’s policy is to leave matters related to its shareholder voting rights to investment banks and other companies that actually manage the financial assets.

Ide of the NLI Research Institute questioned whether the central bank has an appropriate exit strategy regarding the ETF.

“The BOJ is the only central bank that purchases stock to prop up prices,” he said. “If it should reverse course on its monetary-easing measures and begins selling the ETF, that could lead to a major drop in stock prices.”